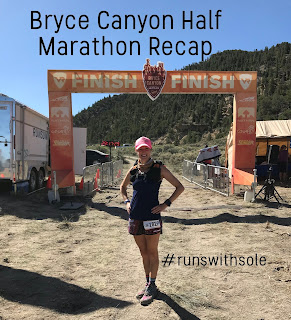 I was lucky enough to win an entry to ANY of the races put on by Vacation Races. Vacation Races puts on races in some of the most beautiful places throughout the United States, many of which are through national parks. I won the entry through a giveaway hosted by Lily Trotters. At the time of the giveaway, I didn't have any Lily Trotters compression socks but I won 2 pair as part of the same giveaway. I also won some other goodies. But the reason why I bring this up is that the experience I had with Lily Trotters was so amazing, I knew I wanted to support this company. After wearing the socks and loving them, I made sure to let Casey, the superwoman in charge of Operations and Engagement, know that I would love to be an ambassador when they open up the program. And thankfully, I was able to become an ambassador and proudly represent Lily Trotters now.

I had a hard time deciding which Vacation Race to do. When talking about it with my husband, we decided we'd take a road trip out to Utah with the kids and experience Bryce Canyon! So, I registered for the Bryce Canyon 50K and we made our plans.

Fast forward a few months and it's about 3 weeks before the race. It's Mother's Day weekend and I caught a cold from one of my daughters (that was not the Mother's Day present I was expecting). I was scheduled to run the PCT 50 Miler the following week and was a little concerned with how it would go. But as the week went on, I was feeling ok and decided to run the 50-miler. That race went really well despite my sniffling, snot-rocketing and coughing throughout. I even got a course PR and 4th in my age group. Well, then my body revolted. A few days later, my cold went out of control. I lost my voice, I had a bad cough and just felt like crap. I had already been to the doctor to rule out strep but at that point, my cold wasn't too bad. But by the day before we were leaving for Utah, I was miserable and needed to go back to the doctor. And I was diagnosed with bronchitis. Shit. I got some antibiotics and basically resigned to the fact that I wasn't going to run. I decided to email the race director and drop down to the half marathon if by some miracle, I'd feel ok to run. My husband felt that, as long as I was up for it, we should still go and just make the decision about the race once we got there. So we hopped in the car and went.

We spent a few days in Arizona first and then got to Utah on Friday, the day before the race. We went to the expo and I got my race bib and other stuff. I was on antibiotics for 4 days at that point and was feeling pretty good. My cough was mostly under control so that was a good sign too. I decided to run it and just hike it if I felt bad (there was a 5-hour cutoff). And if things got really bad, I'd just bail. I'm not going to kill myself.

Race morning arrived and I got to the race start about 45 minutes before the start. Plenty of time to use the bathroom and try to stay warm. Yes, it was 39 degrees at the start. In June! Needless to say, I am not used to those temps and I was not happy!! I had bought a buff at the expo the day before (I forgot mine) thinking I'd use it because it was going to get warm. But no, I used that thing as a scarf to stay warm! I was so happy I had it!! Sheesh!


Back to the bathrooms for a minute. This was the first race I had been to that used compostable port-o-potties. Yes, you read that right. Our waste was being recycled and composted. There was a toilet seat sitting on top of a big bucket. Next to the seat/bucket contraption, there was a smaller bucket filled with dirt. You did your business and then covered your business with dirt (one scoop for #1, two scoops for #2). And the whole contraption was inside a little tent. I have to say, these were the cleanest port-o-potties I've ever used and there was little smell as well. I hope this catches on and other races use them as well. 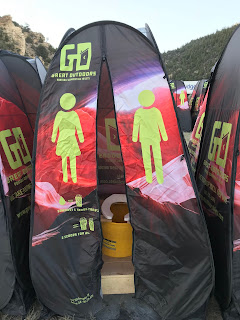 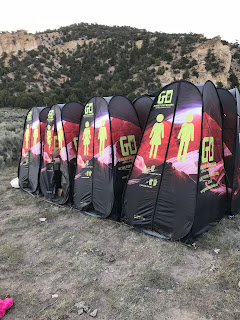 Finally, it was time to start. We lined up, got our instructions and off we went. It took me a little while to warm up and I was afraid my lungs were going to revolt and I'd cough due to the cold and the altitude (Bryce is at about 8000+ feet). But I kept my pace slow and did a run/walk in the first mile and that seemed to help. After mile 2, we hit our first real hill and it was a conga line getting up the single-track. The slow pace helped keep my lungs happy.


Then we went into some beautiful forest with some rolling hills. It was so green and lush. I loved it. I was really surprised at the terrain. From the pictures of Bryce Canyon, it's all various colors of brown and yellow and red hoodoos (those are what the rock formations are called), all sandstone and desert-looking. But all of the canyons of hoodoos are surrounded by lush green forest. It was really beautiful. 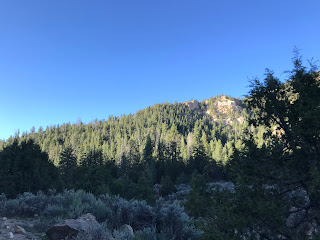 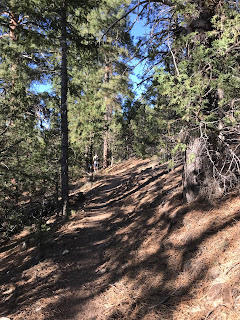 We hit the first aid station after mile 5. There was some climbing through the forest to get there and once there, I had warmed up enough to de-layer. From the first aid station, we ran down hill for a couple of miles and after a turn, you come upon your first view of Bryce and some hoodoos. It was nice to see others stopping for pics, so I had to as well. 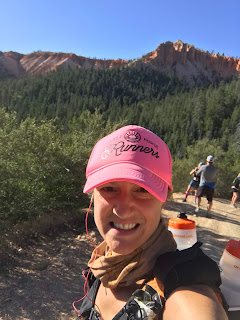 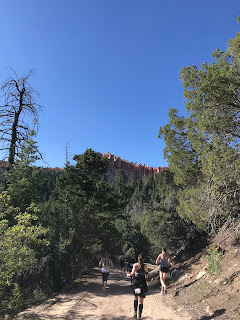 Shortly after that viewpoint, it was time to climb up to the second aid station. Now, it's going to be hard to explain this and my pictures do not do it justice. Over the course of a mile, we climbed up some tight single track that was a mixture of sand and rocks. In addition to that, the half marathon course was out and back from the aid station. So not only did we have to climb up this tight single track, but we had to share the trail with people coming down from the aid station. It was tight and it was dicey at times. It was a long-ass mile, that's for sure. My lungs definitely unleashed two coughing fits which made it even more difficult to get up the trail. But finally, I made it to the top and enjoyed the fruits (and bacon) of my labor.

Once we left the aid station, it was back down the nutty mile of single track and then pretty much a straight down-hill shot to the finish. I was feeling really good at this point and my lungs were happy. I flew to the finish line and was able to finish in under 3 hours. I was shocked to see that I actually finished 6th in my age group. I was really happy with how my body held up and taking it extra slow in the beginning to warm up and let my lungs adjust helped for sure.

Overall, while I was disappointed to not do the 50K, I really enjoyed the half marathon. And it gave us more time to explore Bryce Canyon after the race!

I loved this whole experience so much and I would definitely do this race, or any race by Vacation Races, again. Here are my top 5 reasons to run with Vacation Races, and Bryce Canyon Ultras, specifically:

1. The views. It really goes without saying that this was a beautiful race. Unexpectedly and expectedly beautiful. I loved every view.

2. It was incredibly well-organized. From the registration process to when I needed to transfer my registration to the half marathon, to all the pre-race info and the expo/race bib pickup process, I never felt like I didn't know what to do or how to go about doing it. There was a gigantic race guide that even had travel and sightseeing information. And all of the race organizers I spoke to throughout the week were amazing.

3. The aid stations. There were 4 aid stations (one you hit twice) for the half marathon. Two were low-key with water and a small amount of snacks. The main aid station (the one at the top of the hideous climb) had hot food, the usual ultra fare, bacon, water, electrolytes, etc. The race was a zero-cup race so it provided camp mugs to be used instead. And there were volunteers washing the cups in between uses. It was awesome.

4. The volunteers. Everyone that helped out at the expo, the aid stations and at the finish area were amazing, especially those washing cups! Normally, most volunteers I encounter are pretty darn amazing. Especially volunteers at ultra races. But these volunteers were just on another level. Always smiling, giving encouragement, helping me when I was coughing at the aid station post hideous climb and again at the finish. My faith in humanity is always restored at races but after this one, I felt like I had just received a big giant collective hug from everyone in Bryce Canyon. 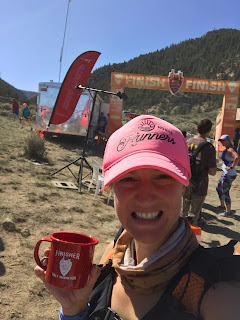 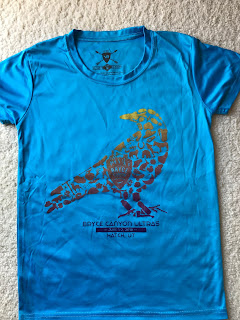 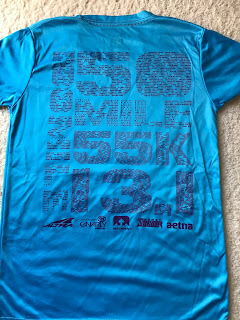 And that's a wrap! I had an amazing time in Utah with my family and can't wait to go back again. 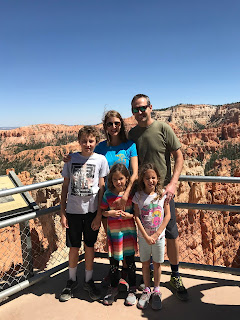 Have you ever been to Bryce Canyon? Have you run with Vacation Races?


I'm linking up with the Friday Five 2.0 link up, hosted by Rachel at Running on Happy and Lacey and Meranda from Fairytales and Fitness. When you're done here, be sure to check these ladies out!