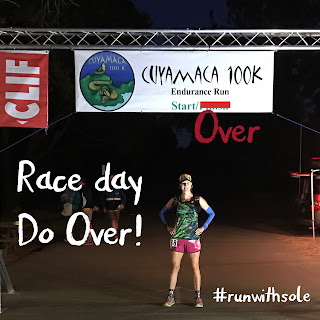 Have you ever run a race and wished you could have a do-over? I think all runners have those wishes every now and then, which is why we often run the same races over and over! And if we want a race day do-over, we often want a training do-over as well. Perhaps this is why it's the topic for this week's Tuesday on the Run blog link up, hosted by My No-Guilt Life, MCM Mama Runs and Marcia's Healthy Slice. When you're done reading here, go check them out!

I have to say that I would love a race day do-over for my big race of this year, the Cuyamaca 100K. But it isn't necessarily because I want to change my training or I did something wrong. In fact, I think my training went as well as it could, under the circumstances. If you read my race recap, you know that I've been dealing with some health issues. And those health issues really prevented me from running the way I would like. I mean, I got as many miles and training races in as I could but I wish I could have run all of them feeling good and not feeling the way that I did most of the time. I wish I could have run the race feeling good as well (well, as good as one does when running 63 miles at a time). But I think I had the best result I could have asked for: I finished. That's what counts. Does all of this mean I want to run the race again? Not really. I have my eyes on a bigger prize and hopefully I won't need to run this race again to achieve it :)

As for races where I clearly messed up? Yeah, I have those too. When I ran the Walt Disney World Marathon 800 years ago, I was fairly new to marathoning. This was marathon #3 for me and I just still didn't know what would work for me nutritionally. After I had my first baby, my body did not metabolize sugar very efficiently and I had major stomach issues while on the run. This was my second marathon after having my son and I just didn't know what would work for me. I didn't spend enough time on any one product to know what worked (I did learn the hard way what didn't work). Needless to say, I spent the entire 26.2 miles running through the parks of Disney World to find the nearest bathroom. It was not pretty. Thankfully that hasn't happened since then, though I am still plagued with issues from time to time. But not sure I'd want a do-over of WDW Marathon. Maybe if I went with a big group of friends and we did the Dopey Challenge. Gotta make it worth the trip :)

Do you have a race and/or training do-over? What would you do differently?
Posted by Run with Sole at 12:00 AM