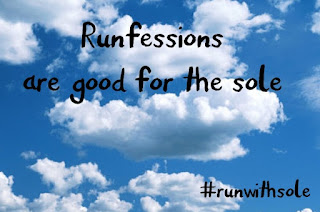 It's the last Friday of the month, which means it's time to wipe the slate clean and runfess all of my fitness indiscretions. I haven't runfessed since July! That's a lot of time for many, many indiscretions.

But before I continue, I'm linking up with Marcia's Runfessions link up over at Marcia's Healthy Slice. Head over there when you're done here!

And, since I'm releasing five runfessions, I'm linking up with the ALL-NEW Friday Five 2.0 link up, hosted by Rachel at Running on Happy and Lacey and Meranda from Fairytales and Fitness. When you're done here, be sure to check these ladies out!

1. As my big race approached (Cuyamaca 100K on 10/1), all I could focus on was the time off after the race was over. I know, I should have been excited about the race and all that but I really wasn't. I was really burned out from training. I was having a hard time with my health issues and really just wanted to be done running for a while. I wanted to get my surgery over with and begin to move onto something else.

2. I finally had my surgery a couple of weeks ago. You know that looking-forward-to-not-running thing I mentioned above? Yeah, that is over now and I'm ready to be active again. I've done a few strength training sessions and some yoga. That's been great. As for running, I have only run once so far. It was kind of pitiful and I'm trying to stay positive and upbeat. But I have to runfess that I'm disappointed in myself that I can't run well yet. Trust me, I know I'm still in the recovery and building-back stages. I'm trying to not be too hard on myself. But it really kind of sucks to go from running a 100K to having trouble with a mile. I know...patience. And I'm Dr. Jekyll and Ms. Hyde, I know. I want a break. I don't want a break. Really, I just want to feel like myself, which is a runner. And I'm not that right now :(

3. I do NOT do well when I'm not feeling well. And these current health issues take me back to a sad place in my life. As I mentioned in my 100K race recap, the majority of my issues stem back to when I was pregnant with my twins. Yes, that was a happy time but it was also a time of extreme anxiety and fear that we would lose them, like we lost the pregnancy before them. I have battled depression off and on since then and having to go through all of this again now kind threw my emotions for a loop. I have been off emotionally since finding out about this back in July. Being cooped up inside and not being able to do much activity in the week after surgery kind of set the tone. I am thankful for my friends that called, texted, visited, brought treats and made us dinner. That really helped keep my spirits up, especially when that first week was so painful and I just felt like crap. And as I've gone back to work and gotten back into the swing of things, I'm feeling better. But I still don't feel like myself.

4. With all this non-running and not being that active, I'm living vicariously through my clients.  I am giving them the workouts I really want to be doing right now. I'm not being mean or anything, but I've definitely upped the intensity of workouts. In fact, I had one gentleman in one of my classes tell me that the class was "f*cking brutal" and he was only happy when it was over. Oops. But in all honesty, they're not paying me to take it easy on them, right? Maybe I should ease up a little... 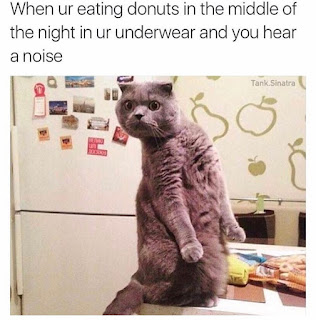 5. My parents came to help out for a few days when I had my surgery. They are the absolute best. My dad took the kids to school, my mom did the majority of cooking and stuff. They really helped ease the load since I was completely out of commission that week. But the one bad thing they did was buy some donuts the morning they were leaving. Now, I had lost my appetite most of that week following the surgery so I didn't want any of the donuts. My mom put them in the pantry for when I would want one. My husband moved them to the garage so he wouldn't eat them. Well, a couple of days later when I was going back to work for the first time, I passed the donuts in the garage. So I quickly ate one before any of the kids came out to get in the car. I was basically that cat in that pic because I did that twice more and stuffed almost an entire donut in my mouth so my kids wouldn't see me eat it. But I was fully dressed and not in my underwear! I love my mom but I wish she wouldn't buy donuts!!

And that's a wrap. What do you runfess this month?
Posted by Run with Sole at 12:00 AM