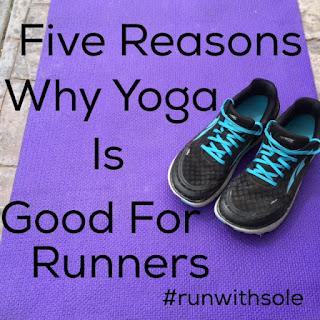 Back in the day, I was a pretty consistent yogi. What started as a way to ease stress while planning my wedding 15 years ago turned into a solid love for all things yoga. I even became a Level I Vinyasa Instructor, though I don't teach classes. But as the years moved along and my running miles ramped up and my interest in other forms of cross training increased, yoga took a back seat. Sure, I still practiced every now and then. I've even combined forces with local yoga studios to offer Running + Yoga programs (stay tuned as these may be coming back in the future!). But, sadly, that initial love affair had fizzled. Until recently.

Before I go on, I'm linking up with the Friday Five link up hosted by Courtney at Eat Pray Run DC, Cynthia at You Signed Up for What and Mar at Mar on the Run. Be sure to show them some love!

A couple of weeks ago, my stress level was at an all-time high. My insomnia has been bad, which hasn't helped. So I did a couple of Sun Salutations in the back yard while my girls were napping and I instantly felt relieved. I immediately remembered how much yoga used to help me relax and regroup, something I've been having trouble with doing lately. That evening I met up with friends and I brought up how much just a few poses helped me feel better. We decided to start going to the local studio together and we all asked our husbands for class passes for Mother's Day (here's hoping mine comes through!). And in the meantime, I've joined the #MayIBeginYoga2016 pose-a-day challenge hosted by @beachyogagirl and @kinoyoga on Instagram. It's been so fun so far! 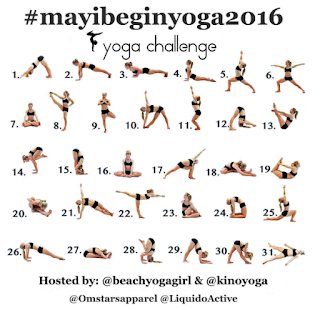 Since I've rekindled my love affair, I thought I'd share why I feel yoga is so important for everyone, but runners in particular.

You may think that the laid-back, peaceful aspects of yoga wouldn't necessarily mesh well with runners. But yoga has a place in any runner's training plan. Here's why:

1. Yoga helps with muscle imbalances. The problems many runners deal with have to do with tightness and imbalances between muscles groups (such as over-active quadriceps and under-active hamstrings). Practicing yoga on a regular basis will help not only build strength in the areas where it's most needed, but increase the flexibility of those muscles as well. For instance, runners have notoriously tight hips and calves. Doing yoga on a regular basis can help increase the flexibility in these areas, while building strength in opposing muscle groups, allowing for a more efficient running form.

3. Yoga builds a killer core. Yoga is an excellent way to build strength in the abdominal and back muscles, as well as your hip flexors and glutes (all of which are part of your core), which can help runners keep their running form as they begin to get tired during long training runs and races, among other important things.

4. Yoga can help runners bring focus to their training. It is very easy to get into a running rut, especially when you're not training for anything specific. Yoga can give you that much-needed boost. When you start seeing results in the form of increased strength and flexibility, you will be excited and motivated to keep working. And yoga can also help with the dreaded burn-out when nearing a big race. Sometimes doing something other than running can really help balance the monotony of training.

5. Yoga is a great stress reducer. Let's face it, most runners are pretty Type A. We can get pretty obsessed with split times, miles logged, race calendars and more. Practicing yoga on a regular basis can help the stressed-out runner relax and do something that doesn't require a GPS, watch, playlist, etc. Yoga brings balance to a frazzling sport. Even the most laid-back runners can get caught up in the frenzy of running and yoga can help reel you back into a calm state of mind. I know just the few poses here and there over the past couple of weeks has really helped me relax.

Do you practice yoga? If so, how often? Do you think your running can benefit from yoga?
Posted by Run with Sole at 7:00 PM