Are you a Race Monogamist? 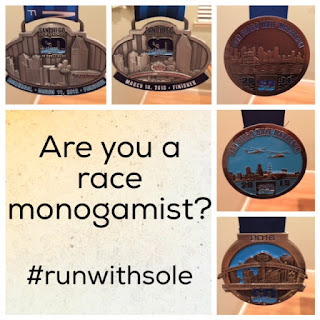 I just coined a new term: the race monogamist. You know, the runner than runs the same race over and over again. Sure, you may check out other races here and there, but you are true to that one race and do it every year. Or maybe you're a monogamist to several races? A race polygamist, perhaps? Ok, my head is spinning. But, I think I'm a race polygamist. I race many of the same races every year. And that's what we're talking about here on Tuesdays on the Run.

Before I continue, I'm linking up with the Tuesday on the Run blog link up, hosted by My No-Guilt Life, MCM Mama Runs and Marcia's Healthy Slice. When you're done reading here, go check them out!

I never really gave it much thought until I saw this week's topic, but I am definitely a race polygamist. There are quite a number of races I love to do every year and some I'd like to do more than once (but not necessarily every year). Here are some:

Cherry Blossom 10-miler. This was my favorite Washington, DC race. I did it for the first time in 2006, and it was the first race I ran after my son was born 6 months earlier. I tried to do it every year after that but sadly, 2010 was my last year because I got pregnant with the girls right after that race and then we moved to San Diego right after they were born. It will always hold a special place in my heart and if I have the chance to do it again, I will!

Marine Corps Marathon. I've done this one three times and will probably do it again at some point. It was my first and second marathon and then I did it the 10th anniversary of my first marathon (did your head start spinning with that?). It's such a great race.

New York City Marathon. As a New Yorker, I will always have this race on my to-do list. I may not enter the lottery every year but I know I'll run this a few more times in the future.

Griffith Park Trail Marathon. I just love this race. It's organized well, it's in LA so it's not too far and there's always the chance I'll see celebrities. I couldn't do it this year but hopefully I'll be able to do it again in the future.

San Diego Half Marathon. I've done this one every year it's been in existence. I really love this race and I love that they recognize the runners that do it every year with special "legacy" swag. Those of us that have done it all 5 years received a jacket this year. It's pretty sweet. I'll definitely keep doing it as long as I can. In fact, I believe this is the race I've done the most times out of all the races I've done. I'll have to think about it a little more, but I'm pretty sure it's the one I'm most monogamous with :)

Noble Canyon 50K. Ok, this one I don't actually love. I may not even like it. I did it for the first time in 2014 and it was pretty tortuous. I did it again last year because it worked in my training. And I just signed up again for this year's because, again, it fits in my training. I'm doomed to do this race forever! And I only dislike it because it's usually hot as hell and the course is one of the more difficult mountain races here in San Diego County.

PCT 50. I can't even believe there's a 50-miler on this list. It was my first 50-miler last year and I just finished it last weekend for the second time (stay tuned for my recap later this week!). It is part of the San Diego Slam, which is a series of the toughest ultramarathons in San Diego County: the PCT 50, the San Diego 100, the Noble Canyon 50K and the Cuyamaca 100K. So, my BRF Vanessa and I are entering the slam this fall beginning with Noble and hoping to finish with the San Diego 100 next year. So another PCT 50 for me! Yay and YIKES!

There are other races I've done that I would probably do again if it worked out but I would say these are the top ones on the list.

And the one race I feel really strongly that I will most likely never run again is the America's Finest City Half Marathon, here in San Diego. I actually really don't mind the race itself it's just hot (it's held in August) and I don't really like it enough to do it again. If it were a trail race, I'd probably do it again despite the heat. But for now, it's a one-and-done kind of race for me.

How about you? Are you a race polygamist or monogamist? Or a one-and-done racer?
Posted by Run with Sole at 8:39 PM