The Hardest Thing About Running.... 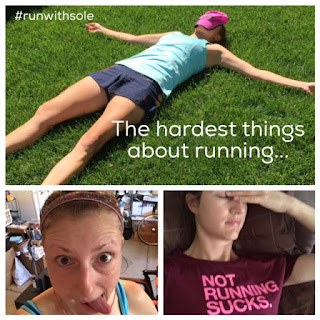 Last week, we talked about the best thing about running. It was pretty easy for me to narrow down my favorite thing about being a runner. This week, though, we're talking about the hardest parts of running. For me, this one is a little more difficult.

Before I continue, I'm participating in the Tuesdays on the Run blog link up with My No-Guilt Life, MCM Mama Runs and Marcia's Healthy Slice. When you're done reading here, go check them out!

Because I can't narrow it down to just one thing, here are the three hardest things about being a runner for me.

Dealing with injury has to be one of the hardest things to deal with as a runner. I am grateful I haven't been injured many times but even the luckiest of runners will deal with something over the course of their career. While training for my first marathon, I was sidelined with awful IT Band issues. I had to defer my registration to the following year (when races still did that!) and even though I ran it, I was dealing with my unresolved IT Band issues for the entire race. I had to take 3 months off to deal with it. It was depressing and hideous and hopeless, for the injured runner has no idea how long they will remain injured. I couldn't even look at a runner running down the street without getting teary. Ugh. I've also been sidelined by plantar fasciitis, hamstring issues and pregnancy (I wasn't allowed to run while pregnant and ultimately was on months of bedrest with all my kids). Oh and I broke my foot and dislocated my baby toe (how this happened does not need to be disclosed). I was in a cast for 3 weeks and then one of those stupid ugly shoe things for another 4. Needless to say, these times were not good.

Second to injury is burnout and/or lack of motivation. For someone that races a lot, I am constantly on the verge of burnout. With high miles, early mornings to either train or race and lots of fatigue, sometimes it takes more strength to get ready to run than to actually run. Thankfully things like running partners, social media accountability, fun running clothes, great race experiences and a supportive family really really help.

The third hardest thing about running, for me, is time management. This one gets super tricky for most runners. As a coach and trainer, my schedule is pretty crazy. In between clients, I'm often doing kid-stuff, house-stuff or something else and there's not always time to get a run in. This leaves early mornings (if I don't have a client session) or later at night after the kids have gone to bed. It's hard. Some days I'm running 2 or 3 times just to get my miles in. It gets exhausting, both physically and mentally.

Most of the time, though, it's worth all the trouble to get out there and run. You'll never regret a run, even a bad one :)

What are the hardest things about running for you?
Posted by Run with Sole at 12:00 AM