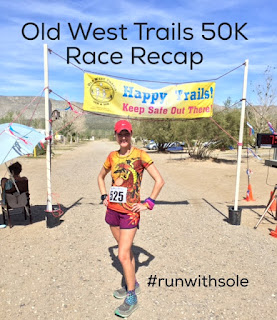 This past weekend I ran the Old West Trails 50K out in the Anza Borrego Desert in east San Diego County. When I ran the Oriflamme 50K back in 2013, the course went into Anza Borrego Desert but it wasn't entirely in the desert. So this was my first desert race! And just as you may imagine, it was hot and dry, dusty and sandy, all of which made it a tough race. Temps were up toward 90 degrees by the time we finished and that heat is not something I love while running, especially when it's March. But I love running with great friends, through beautiful places and this race didn't disappoint in either area.


I ran the race with my partner in crime, Vanessa. We went into it feeling a little uncertain. I have been dealing with a hamstring issue since the San Diego Half Marathon on 3/13. I have high hamstring tendinopathy, which is a chronic tendinitis-like condition in the tendons connecting the top of the hamstrings to the pelvis underneath the glutes. Anyway, it was bothering me the whole week leading up to the 50K and I was nervous about the race. Vanessa had a bad case of bronchitis and was worried about how she would do as well. Thankfully, we both made it through.

We left super early, at 4:15am and got to the race at about 6:00am. We checked in and met up with various friends in the clubhouse of the Stagecoach Trails RV park, which hosts the start/finish of the race. The Shelter Valley Citizens' Corporation put on this race and they had a nice breakfast spread for us and an even better finish line lunch (more on that later). As the sun rose, we checked in, chatted with friends and geared up for the race. I got to meet fellow InknBurn ambassador Kristina. This was her first 50K and she was super excited! She did awesome! I also got to see Tam, another InknBurn ambassador that I met at the LA Marathon. This was her first 30K and she kicked some butt!

We were planning on running with Jenny (aka @runnylegs) and thankfully, we caught her and her sweet husband Sean (aka @ultrarunnersd) right at the start of the race. We knew Sean would be in the front of the pack and we three girls were set on keeping an easy pace together somewhere in the middle of the pack. And promptly at 7:00am, Geezer Larry Pustinger (he calls himself this, I didn't give him this name!) called us all to the starting line, gave us instructions and told us to go! And off we went!

The course was kind of like a T. We ran about a mile into the desert, turned left and ran about 7 miles into the desert basin. This section of the trail had the most climbing of the entire race. It was a little tough on my hamstrings but as we were finishing the climbing, they started to loosen, thankfully. I looked at my watch when they were feeling good and we had run 13 miles at that point. So, I basically have to run a half marathon before my legs feel warmed up. Sheesh! Anyway, after coming out of the desert basin, we ran up and back out to the main desert trail and then crossed over to the other side where we ran for another 7 miles or so out into the desert and then back to the main road. I will say, that even though this was a relatively flat section of the race, it was a desert road not closed to the public. We were constantly moving out of the way of cars and trucks all through the section. It was kind of annoying after a while because of all the dust the cars were kicking up. Not easy on the lungs, especially for poor Vanessa. In fact, this whole section of the race was kind of a pain in the butt (and I don't just mean my hamstring!). It was a varying assortment of sandy surfaces. It ranged from deep beach sand, dry desert sand and then packed sandy trail. It was hard on my feet after a while and it felt like I was working so much harder to run through the especially deep sandy areas. But we stuck together, walked when we needed to, drank a ton of fluids, iced ourselves at every aid station and made it through.

As we made it back out to the main desert road with just about a mile left, we were starting to pick up the pace. We knew Jenny would have a 50K PR so we were hauling as best we could after running 30+ miles. And then her hubby Sean came running up to run us into the finish. Can I just say, they're the cutest? Anyway, Sean ran with us to the finish, snapped a bunch of cute pics and then finally, we saw that sight for sore eyes (and lungs - dry desert air is no joke). Man, it felt good to finish.


Once finished, we headed in for the finish line food! Man, what a spread. There was a nacho bar, some pasta, potato soup, chicken soup, salads and even cake! It was great. After stuffing our faces, we cleaned up a bit, changed into our race shirts and headed home. It was a nice drive through east San Diego County back home.

Don't forget to check out the Tuesdays on the Run blog link up with My No-Guilt Life, MCM Mama Runs and Marcia's Healthy Slice. When you're done reading here, go check them out!

Overall, I really enjoyed this race. It was well organized and easy to get to. The before and after spreads were great, the volunteers were nice and I love the race medal made of leather! What I didn't love was the sand and the heat. But, if you want to run through the desert, I guess you have to put up with a little heat and sand, right?

Happy trails!
Posted by Run with Sole at 8:50 PM