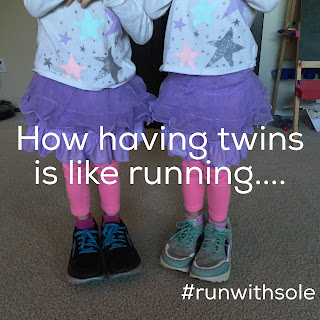 March 18th marks my sweet baby girls' 5th birthday. I can't believe how quickly the time has gone by. It seems like yesterday when we were bringing them home from the hospital. So much has happened since then, it's no wonder the time is flying. Having twins has been such an amazing experience for us (though, my oldest would say otherwise). While a wonderful experience, it's been one requiring amazing feats of strength and endless amounts of endurance! Kinda like being a runner! As it turns out, being a parent to multiples and being a runner are not really all that different. And since I've got this running thing (mostly) under control, maybe I'll be able to manage being a mom to twins + 1 too! Hey, we made it 5 years so it's not that out of the question, is it?

Before I continue, I'm linking up with the Friday Five link up hosted by Courtney at Eat Pray Run DC, Cynthia at You Signed Up for What and Mar at Mar on the Run. Check them out when you're done here!

Here are my 5 ways having twins (or children in general) is like running:

1. There are good days and bad days. When it comes to parenting, there are some days that are just so wonderful, I wish they would never end. And then there are those days where I'm thankful just to get through the day without anyone losing an appendage. The same can be said for running. There are some days where everything just clicks and then there are those days where you wonder if you've made the biggest mistake of your life by signing up for a race (or parenthood?). I try to leave those bad days behind me as much as possible and take comfort that I can try again tomorrow. It may not be easy but it is always worth it, as a runner and a parent!

2. Schedules = keys to success. One of the best pieces of advice we received before our girls were born was to keep them on the same schedule. When one eats, feed the other, even if she's sleeping. When one is sleeping, try to get the other one to sleep too. And so on. It helped prevent mayhem many many times. And with an older child, we had to stay on schedule even more so. For example, I couldn't put the girls down to nap too close to school pick-up time, so I needed to plan my days around that too. It was overwhelming at times, but the schedule helped to keep us all on track and relatively happy. Well, we runners thrive on schedules too. We need schedules to train for races, ensuring we have enough miles in our legs to make it through the race. We also need schedules to keep on us track mentally. Without a plan, it is very easy to lose focus and motivation. Schedules allow us to prepare as parents (hey - nap time is nothing to mess around with!) and as runners.

3. Even with that schedule, you still need to be flexible. As soon as you get things under control, someone (or something) comes along and messes it all up. With twins, it's always trying to be faster than the other twin. And what I mean by this is that, when you're dealing with one twin, you have to be faster than the twin that's not being tended to. When they were little, it was about being physically faster and having great reflexes. You had to get the diaper on one before the other twin had the chance to take off her diaper and throw it across the room. Or pull all the wipes out and eat them. Now it's more emotional stuff like dealing with budding independence, temper tantrums and fights between them. You have to be able to sway off course a bit if the situation calls for it. Running requires the same flexibility. Just as you seem to get the hang of training, something always comes along to throw you for a loop: sickness, vacation, injury, job deadlines, etc. The one thing I've learned from running (and parenthood) is to be creative in how I go about doing things and roll with the punches.

4. Confidence will come with experience. I remember one of the first outings I took by myself with all three kids after the girls were born. It was to one of their early well-baby visits and my son didn't have school that day so I had all 3. Getting ready to leave, driving to the doctor and the appointment itself are all a blur (except for the screams after the shots - I remember those) but I clearly remember getting everyone into the car after the appointment. After getting Keller into his seat, the girls into their car seat adapter things and shutting the car door, I took a deep breath and said to myself, "I can do this." It was such an empowering moment that whenever other seemingly difficult situations came up, I reminded myself of that day. I'm not saying everything is easy; I still freak out and I still need to ask for advice and help. But in those moments where I'm beginning to freak out, I try to remind myself that I have conquered harder things before and I can handle this too. And I've done the same thing with my running. I have become more confident in my abilities with every training run, race completed and so on. I know my body can handle what I throw at it. It may not always be pretty, but I can do it.

5. You will be amazed at your strength. As a parent and as a runner. You will be amazed at what your body can do, and I don't just mean pregnancy. I was amazed at how my husband could walk and bounce the twins at the same time during the hideous colic-y days. He would have both of them in his arms and bounce and walk. Walk and bounce. For hours without food, water, bathroom break, killing someone, etc. I'd be doing bath and bed time with our son while he would be doing that. It was awe-inspiring, for sure. Well, we runners are a pretty powerful bunch too. We train for weeks and months at a time, we wake up early, we go to bed late, we eat lots of healthy things (and some not so healthy), we juggle life stuff. And so much more. We are superheroes in compression socks and singlets.

Being a parent to twins + 1 helps me be a better runner, that's for sure! Happy 5th Birthday to my Ellen and Brenna!