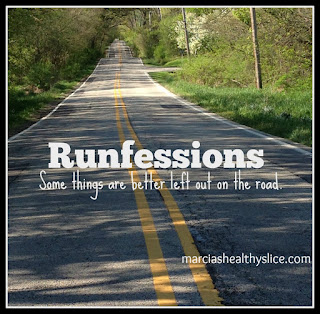 It feels like I just posted my runfessions for February and here we are, already a month later. And, sadly, I don't feel like much has changed since last month. Before I continue, I'm linking up with Marcia's Runfessions link up over at Marcia's Healthy Slice. This is a chance for all us fitness enthusiasts to admit our fitness indiscretions, if you will. Because we're all human and stuff and it feels good to let it all go instead of mentally beating ourselves up. Head over there when you're done here!

1. March kind of kicked me in the ass. I ran the San Diego Half Marathon back on 3/13 and tweaked my hamstring a little. There is quite a downhill finish and downhills aren't exactly friendly to hamstring issues. I was in a lot of pain after the race and was concerned since I have so many other races on my schedule and because I'm a running coach and trainer so getting hurt isn't something that is good for business. I have to be careful. But I got a Thai massage the day after the race which really helped. Thai massage is equivalent to a human foam roller. It's painful but effective. It helped loosen things up and I felt good for the Old West Trails 50K the following week. It wasn't perfect but all right. I only ran minimal miles in between races and stretched, used the portable muscle stim and kept things easy. Since the 50K I've felt ok too. I guess the runfession in here is that I just haven't been running as much as usual and feel guilty about it. But I know it's better to rest it and take it easy, only running what's necessary, than push it and make things worse. 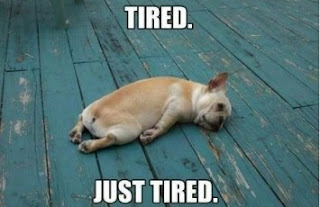 2. The past few weeks have been so busy with work, family in town for my twins' birthday, racing, etc., that I'm just trying to stay afloat. I am not really enjoying my runs right now. Maybe it's because I'm afraid of the hamstring thing, maybe it's because I'm a little burned out. I know it has a lot to do with that. I'm tired and it's catching up to me. I want to blame the time change. With a race the morning of the time change and then another race the following weekend (plus early mornings during the week), I feel like I haven't gotten a good stretch of sleep and it's affecting my mental state and my running. Next weekend is Ragnar SoCal, so I'm hoping that spending time with my girls will help get me out of this funk.

3. I'm a little embarrassed to admit this, but I've been running a lot on the treadmill lately and I've been getting a little obsessed with awful TV shows. Basically, if it's on Bravo, I've been watching it. Real Housewives of Beverly Hills, Real Housewives of Potomac, Tour Guide, Vanderpump Rules. DO NOT JUDGE ME! It passes the time on the dreadmill. These shows definitely remind me that money doesn't necessarily buy happiness. Or intelligence.

4. I've been eating like a freaking lunatic the past few weeks too. With the reduced running, this isn't really helping the situation but it is what it is. The worst was this past week with my girls' birthday and the many days of celebrating. We had their little party in school on 3/17 with cupcakes, we had their actual birthday on 3/18 with lots of yummy food and cake and then their party on 3/20 with the big cake. And since I was still hungry from the 50K the day before, I may have overindulged a bit. But now that their birthday festivities are over, maybe we can get back to normal and lay off the unhealthy foods. I just feel gross and sluggish. And when you're already exhausted, bad food doesn't help make you feel better. 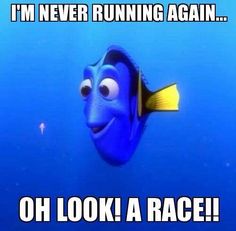 5. Even though I'm tired and burned out, I'm still FOMO-ing hard. Social media is killing me! Seeing everyone's posts of races, beautiful trails and more is just making we want to do all the things and run all the places. But I can't. I need to get myself in order and after the PCT 50 in May, I need to take a little time off. I will still have races and will need to train, but I think the time after that race will be lighter in mileage until I need to ramp things up for the fall. I said it, so I need to stick to it. So, please stop posting such beautiful pictures of your trails and fun races!!
Posted by Run with Sole at 7:50 PM