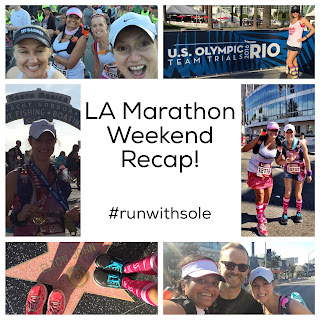 I need to begin with a warning - this post is going to be long. The LA Marathon weekend was absolutely awesome. With the Olympic Trials on Saturday and the race on Sunday, I had the BEST time and there's a lot to talk about!! My race was more a tour than a race. We stopped so many times to take pics (and use the bathroom, which added so much time) that I can't really call it a race. It was so wonderful and there is a lot to share! So you've been warned :)

Before I continue, I'm participating in the Tuesdays on the Run blog link up with My No-Guilt Life, MCM Mama Runs and Marcia's Healthy Slice. When you're done reading here, go check them out!

Back to the recap. As mentioned last week, all weekend festivities were with Smitha. We saw tons of friends up there and met many new ones, but the time with her was just amazing. Can't say enough about my BRF.

We headed up to LA on Friday night after dinner. Thankfully, traffic was actually pretty light and we made it up in about 2 hours, which is good. We stayed with Beth and her wonderful family, friends of Smitha's since middle school (or earlier? I can't remember) and it was so wonderful. They really opened their home to us and it was great getting to know them. The only bad thing about Friday night was Smitha realizing she forgot her hydration vest at home. Thankfully we had some friends driving up on Saturday and she was able to coordinate its arrival. Phew! Crisis diverted!

Saturday started with a ride over to the expo, which was at the LA Convention Center. We did a little sightseeing as the convention center is right next to the Staples Center. I have never been there before, so of course we needed some photos. By the way our cute tanks are from Qtee, which makes great apparel that you can customize! Loved our heart tanks!

Onto the expo. I get a little anxious with race expos. I have a love-hate relationship with them. I love them and feel physically anxious about them until I'm there and have my stuff in my hands. And I've seen everything. But I also hate them because I don't like crowds. So I get anxious about the crowds. It's all so very overwhelming. But we got our goods and made our way through the expo relatively quickly. There was the usual fare, but I did manage to pick up a new hat, pose for pics with Meb and run into a friend from Maryland! That was a nice surprise.


We finished up at the expo just in time for the Olympic Trials to start. The course was a looped course with the convention center right at the start/finish. We planted ourselves on the course and watched the entire thing. It was amazing!! I am now more excited than ever to see the Olympics. We have such a strong team. And I'm just so amazed at how awesome Meb is. He's going to be 41 and just qualified for his 4th Olympic team. He's just a rock star.

After the Trials, we had our We Run Social meet up, which was great. Seeing so many friends and meeting many new ones is the reason why I love doing these races. The whole point of We Run Social is to bring people together from all over the place, to support and encourage one another and just have fun. It's great to be a part of this group!


Saturday night finished with a low-key dinner with Beth. Turkey burgers and a beer for me. I figured that I'd hydrated like a mad woman all day, one little beer wouldn't hurt :)

Ok, Sunday morning. Race Day. We were up at 2:30am, headed to the finish at Santa Monica to take a shuttle to the start at Dodger Stadium. We were there by 5:00am, I think. The race didn't start until 7:00am, so it was a long wait. But it gave us plenty of time to meet everyone we needed to meet, eat our breakfast, use the bathroom 90 times and get ready. At least we could wait inside the stadium. I was still freezing but at least we weren't outside. With all the worry about the heat, I didn't think about how cool it would be when we started. Oh well. I survived. We headed to the race start at 6:45 and made our way into the corrals. We crossed the start around 7:15, I think. Not too bad.


We started at Dodger Stadium, as mentioned already. From there we headed into Chinatown, which was very cool. I loved running under the gates and then seeing the dragons cheering us on.

After Chinatown, we went through several other neighborhoods, including Echo Park, Silverlake and Los Feliz. They were all super cute with lots of awesome looking shops and restaurants. We did have to use the bathroom but didn't want to wait in the huge lines at the port-o-potties. We went into a 99 cent store to use their bathroom, which was in the back of the store. More like a loading dock than anything. It was an adventure in itself.


After this we headed into Hollywood. As you can imagine, I was in my celebrity-loving glory. So much to see, the miles were just flying by. We were on Hollywood Blvd. and followed the Hollywood Walk of Fame a bit and ran by Grauman's Chinese Theater. We had to stop to take some photos, of course.


From there, we turned and headed back to Sunset. My nephew lives right off Sunset so I texted him as we were approaching and he basically bolted out of the house and ran to the course. He got there just as we did and it was great to see him.  It gave me such a boost!


We continued along Sunset into West Hollywood. This is also a celebrity-lovers heaven with all the bars, restaurants and sights to see. Chateau Marmont, Laugh Factory, The Whiskey, Viper Room, Troubadour and more. Oh and Bob Harper. From Biggest Loser. Yeah, that's right. He was a spectator on the course and I spotted him, screamed and ran over to say hello. He was nice enough to take a photo with us and even told us how awesome we were for running. As you can imagine, I was beside myself after that. I was running on air.


But then I quickly came back to the ground as the heat cranked up. We made our way through Beverly Hills and Rodeo Drive, which was quite delightful to see. Then onto Century City and Westwood where it was the hottest section of the course. Very little shade and nothing exciting to see. Though there was a local running group on the course with ice cold Dr. Pepper and Coke for the runners. The only time I drink soda is during an ultra, so this was like a gift from above. They must have been ultrarunners :)


After the Dr. Pepper, we went into Brentwood, which was gorgeous with its tree-lined streets and ridiculously large houses. The shade was wonderful after the heat from Century City. And from here the course started its decent toward the ocean and the finish!!

Man that finish line was fabulous!! We got our 4000lb medal and made our way out. I also earned a second medal for doing Ragnar Relay, which was a gorgeous golden medal in the shape of California.

Phew! What a weekend. The race was so great. Tons of spectators, a relatively flat course (full of sights to see) and the course support made this race one of my favorites. I will gladly do it again. Though they changed the race back to March for next year, so I'll have to see if it will work. But I will definitely do my best to be there again!!
Posted by Run with Sole at 12:00 AM