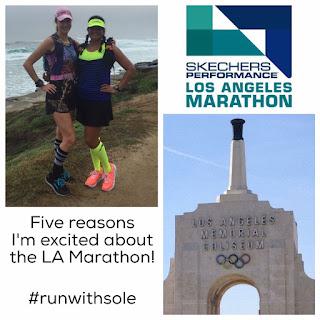 This weekend I'm running the Los Angeles Marathon! I am so very excited, I can hardly contain myself. I did check the weather and they are forecasting 90 degree temps and brilliant sunshine. I am NOT excited about that. And to take my mind off the weather, I'm going to focus on the things I am looking forward to!!

Now, without further ado, here are the 5 reasons I'm most excited about running the LA Marathon:

I have always wanted to run this race. It is typically held the second weekend of March, which usually corresponds with my twin girls' birthday. So I thought running this race would just happen when they turned 20 or something and wouldn't care about having a birthday party. Well, last year the race was plagued with 90 degree temps and there were a lot of heat-related issues. The organizers decided to have it a month early to deal with the temperature issues (how's that for irony?) and moved the race up a month for 2016. When they did that, I jumped on it. I'm hoping they learned how to deal with the conditions last year and will have things ready for us this year. Heat aside, it's just going to be a phenomenal race. It runs through all the best neighborhoods, starting at Dodger Stadium, going through places like China Town, Beverly Hills, Hollywood and all the way to finishing at the Santa Monica Pier. So excited! I mean, look at this video from the race organizers:


2. Time away with friends.

I am heading to LA with my dear Smitha and I can't hardly wait to slam that car door and hit the road. We are going to be like teenagers in that car, singing and dancing our way up to LA. Honestly, I just can't wait to get away. It's been a tough couple of months here with sick kids (and sick parents), a traveling spouse and long work nights for the both of us. I need to get out of Dodge desperately, even if I have to run a marathon to do it. Not only am I running the race with one of my peeps, but several friends will be there and it will be great to see everyone. In fact, there's even a We Run Social meet up on Saturday and that will be a blast! 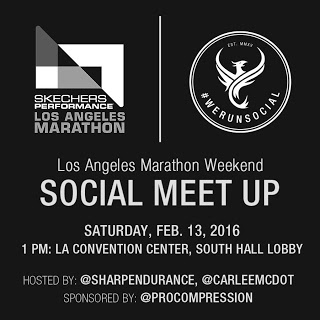 Running a race around the Olympic Marathon Trials is a very exciting thing. I was lucky enough that I ran the NYC Marathon in 2007 when they held the Olympic Trials the day before. It just adds something electric to the already pumped up atmosphere. All the big hitters will be there: Meb, Kara Goucher, Shalane Flanigan and more. The trials are on Saturday and the race doesn't start until 10:00am, so we should be able to see the majority of the race. The course is very spectator-friendly and runs by the 1986 Olympic Stadium, which is just awesome. I can't wait!

That's right. I'm a sucker for a celebrity sighting. It doesn't even matter how famous the person is, I get pretty star struck. I know we'll come across some famous folk either running the race, cheering on the race or sometime while we're in LA. We just have to! Why else would we do this race? ;)

This year the LA Marathon is teaming up with the Ragnar Relay folks and offering a double medal to those that complete both the marathon and any Ragnar Relay event in 2015 (or a select few in 2016). Since I did Ragnar SoCal last year, I get a double medal. I don't always get too excited about "bling" but I'm excited about this one. It's pretty darn cool! Yay! 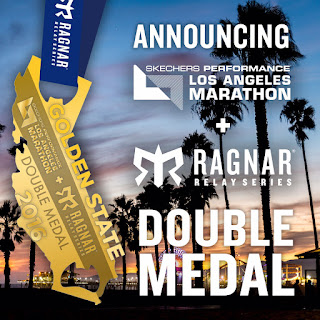 So, while there is nothing I can do about the predicted temperatures aside from hydrating well, adjusting my race plans and not panic, I am going focus on all the fun to be had this weekend. Granted, my race pics may be hideous and I may look like a melted piece of cake but I don't care! It's going to be a blast and that's all that matters!

What 5 things are you excited about this Friday?