Five Things I Love to Eat on the Run! 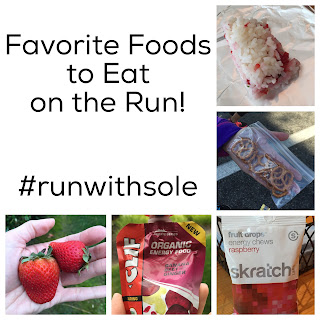 Part of my ultra training is making sure I'm eating right while on the run. I have been plagued with stomach issues ever since I had my first child. For some reason, when I run long, my stomach decides it's time to go into overdrive. Sometimes when I push the pace, it also goes a little insane. I used to be able to eat pretty much anything before the run, eat any gel and have caffeine throughout the entire run. But when I was training for my first marathon after my son was born, that all changed. And basically ever since then, I've been experimenting with 100s of different items on the run. And now I think I may be onto something. It only took 10 years.

I have found that my body tolerates real food more than anything else. When running for hours, all that processed sugar really takes a toll on me and my system likes real food more than anything else. Real food is also higher in water than the processed stuff, so you don't have to drink a ton of fluids in order to start the digestion process. I feel less bloated and just better, overall. Plus, the real food doesn't overload my system with tons of sugar, which is much better for my sensitive stomach. 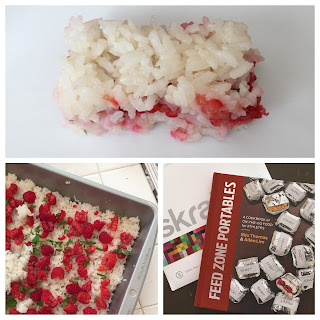 I've had the most luck with making rice bars from scratch and having them about every hour or so on the the run. I started making these just within the last 5 or 6 months training for the San Diego 50 Mile back in January. My partner in crime, Vanessa, and I each make a batch of different bars and then share them along the way. She makes a savory version (with bacon!) and I make a sweet version. The ones in the pic are raspberry and mint. I get my inspiration from the Skratch Labs Feed Zone Portables cookbook. I've also done strawberry and chocolate, pineapple and coconut and peanut butter and jelly. 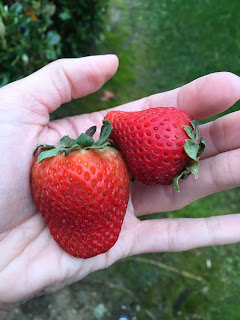 The first time I had fresh fruit on the run was during the Griffith Park Marathon in 2013. Most trail races, as I was discovering at that point, have a plethora of goodies at their aid stations. Think toddler's birthday party: candy, soda, fruit, etc. I distinctly remember eating a strawberry at the aid station at the halfway point and I was hooked. I don't bring it with me all the time, but it's such a refreshing treat when I do. I also love orange slices, bananas, watermelon and blueberries. 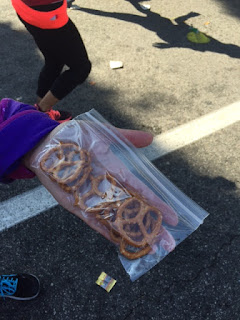 I started running with pretzels well over a year ago. They are easily portable and can be found anywhere. So if I'm traveling for a race, pretzels will be on the menu. I prefer the smaller, thin pretzels as they are easier to chew while running. Between the carbs and salt, they are a great pick-me-up on the run. 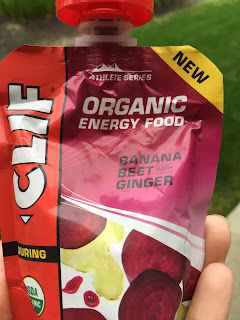 When traveling for a race, or just short on time to make my food in advance, these babies come in handy. The Clif Bar Organic Energy Food packs are just fruit and vegetable purees, and sit well with my stomach. My favorite flavors are the Banana Beet and Ginger and the Banana Mango with Coconut. I've tried the Sweet Potato and I'm not a big fan. They have a couple of new flavors that I'm looking forward to trying! 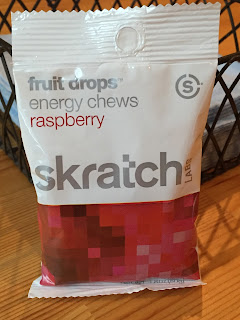 If I'm running a race that's shorter than a marathon, eating chews or gels works for me. Because I'm not running too terribly long, my system won't get overloaded by the simple sugar and erupt in unpleasantness. I find that I tolerate the Fruit Drops from Skratch Labs the best. My favorite flavor is the Raspberry.

Some honorable mentions during a race: Twizzlers, Peanut M&Ms and Coke. I typically only have these during ultras where I know I won't be pushing the pace. But during shorter, faster runs, I stay far away from that stuff!