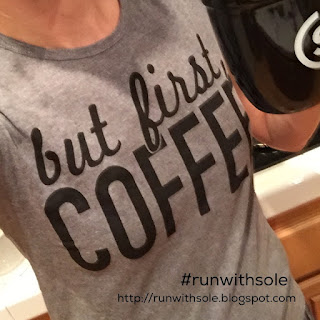 Welcome to 2016! This is my first post of the year and I'm excited to be linking up with Deborah from Confessions of a Mother Runner, Lynda at Fitness Mom Wine Country and Coco at Got2Run4Me. When you're done reading here, please go check them out!

Ultimate Coffee Date is a blog link up on the first Saturday of the month. It's a virtual date with friends to catch up over a cuppa. This is my first time participating and I'm super excited! So grab your mugs and let's get to it!

If we were having coffee, I would tell you...that I ended 2015 in a big way by completing the Mission Trails Regional Park 5 Peaks Challenge with one of my favorite trail running groups, the Dirt Devils. Basically, you run up the 5 peaks that are within the park. According to the website, you can do it on your own time scale, but we did it all in one big run. The trails between peaks 2 and 3 were closed so we had to backtrack back up peak 1 (Cowles Mt) and run down to the roads. We then ran to the base of North Fortuna and completed the rest of the peaks. We covered about 19 miles and just under 5000ft elevation gain. Even though it was challenging, I had a BLAST. It was just a great group of people, some old friends, some new and all amazing.

At the top of our 5th peak with the whole group. Such a fun time! 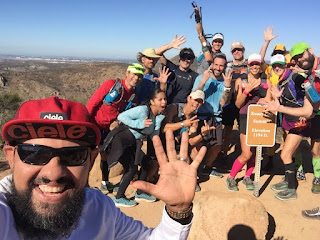 If we were having coffee, I would tell you...I am streaking. Hee hee. That makes me giggle. Seriously, I'm throwing my hat into the run streak ring and I'm going to see how long I can keep it up. This is a real thing with governing bodies and everything. In fact, there are two sister organizations: the United States Running Streak Association and the Streak Runners International. According to the rules, a streak "is to run at least one mile (1.61 kilometers) within each calendar day. Running may occur on either the roads, a track, over hill and dale, or on a treadmill." You can go as fast or slow as you'd like as long as you cover at least one mile. Did you know the longest streak known is held by Ron Hill and has lasted more than 51 years? Don't know if I can top that, but I'm going to try :) 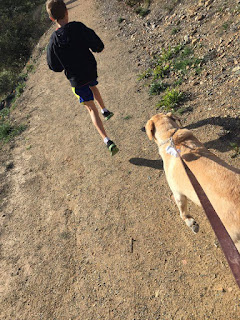 If we were having coffee, I would tell you...that we are celebrating the second anniversary of rescuing our big yellow Lab, Yogi on Sunday, January 3. Getting him was not exactly planned but it feels like he's always been a part of the family. We had just lost our beloved black Lab, Lola, in December of 2013. In a moment of heartache, I started looking at the California Labs and More rescue here in San Diego. A friend of mine rescued her dog with them and highly recommended them to us. So, I filled out an application to adopt, thinking it would take a while to process. It didn't. A couple of days later, we had our interview and our home was inspected and we went to a shelter about an hour or so away, near Valley View to meet two dogs to potentially adopt. The one I was most interested was a Chesapeake Lab named Johnson and then Yogi was next in line. But Johnson was crazy when we met him. Absolutely insane. He didn't seem like he'd be a good fit. But Yogi, on the other hand, was the sweetest, most adorable yellow I had ever seen. The girls were a little worried about his size (we all were - he's 115lbs). But he was just so sweet and I instantly fell in love. We went back the next day (1/3/14) to take him home and the rest is history. We've worked hard to train him (he eats everything whether it's edible or not, on the counter or stove) and he's made big progress. I just love to squeeze him. 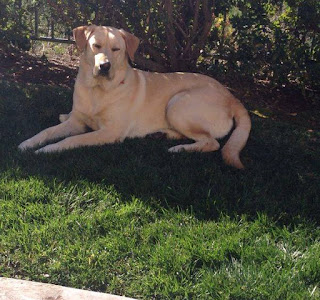 Yogi making himself at home shortly after moving in!

If we were having coffee, I would tell you...in about a month I'm going to be registering my twin girls for kindergarten. What the?? My little tiny babies are getting ready for kindergarten. In fact, the next school year will have two milestones: my girls will start kindergarten and my son will start middle school. I will most certainly need a drink on that first day of school and it may not be coffee! 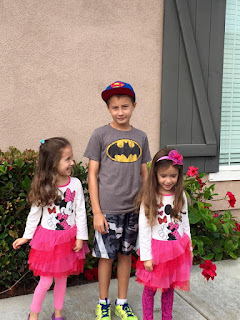 My babies on the first day of school for this school year. Fifth for the big one, pre-K for the two littles. Next year will be a whole new ballgame. Eek!

If we were having coffee, I would tell you...the next time we have our ultimate coffee date, my sister from another mister, Lynne, will be visiting. Actually, she may be leaving the morning of our next coffee date, but that only means I'll probably have some new stories of shenanigans to share. She's the best. I've known her for over 12 years and we've been through a lot together. She's my kids' godmother and the sister I never had. I can't wait to see her! 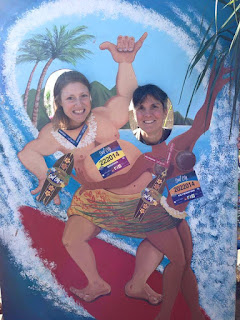 Lynne will always be my Big Kahuna! (this is from Surf City Marathon a couple of years ago.)

That about does it for me! If we were having coffee, what would you tell me?? 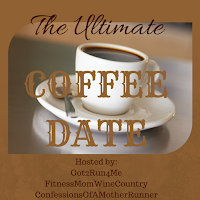