Novelty Runs and Themed Races: Yes or No? 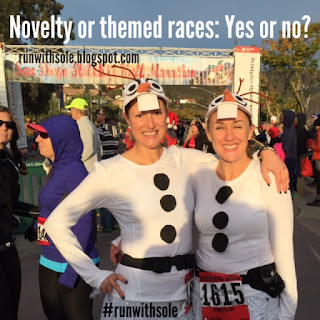 Novelty runs, or themed races, have become hugely popular in the running community over the last several years. I can't say I've ever participated in a novelty run, and I'll explain why a little later. The closest I've ever come to participating in a themed race was when a friend and I dressed up for the San Diego Holiday Half as Olaf from Frozen last year. Sure we could have gone the Santa route but Olaf was just calling our names. And it was fun when spectators sang, "Let it Go!" to us or cheered, "Go Olaf!" But I will admit that hat was really hard for me to run with. I couldn't see very well because my Olaf teeth were in the way! I don't know how people run in full-on costumes.

Anyway, novelty runs are those somewhat silly races you have seen pop up all over the country: the Awesome 80s run, the Color Run, the Electric Run, etc. I would venture to guess the "purist" runner thinks these types of races are ridiculous and they "water down" real road racing. That these types of runs are for people that aren't real runners. In fact, there was a huge uproar last year when the Foam Fest 5K people went out of business and wouldn't offer refunds to folks that had already registered for their races all over the country. Many people claimed that any of these novelty runs were just a way for people to make a quick buck off unsuspecting pseudo-runners. Well, I don't know if that's the case. I think there are plenty of race organizers that start up races and then realize they can't pull it off and cancel their events without refunds. It's important for you to research any race you want to do, novelty or not. But I think these types of events are good for people that want to try running but are afraid or possibly intimidated by regular road races. Personally, I don't know that I'd do a Color Run or other themed race. Though, I did want to do the Awesome 80s run with friends last year but it didn't end up working out with my schedule. Honestly, I am afraid of getting hurt in some of these types of runs. Considering I fell while running on my long run this past weekend (in my defense, it was pre-dawn in an unlit, uneven area!), doing some kind of obstacle race or run while something is being thrown at or on me is probably not something I should try. But if you're game, go for it. 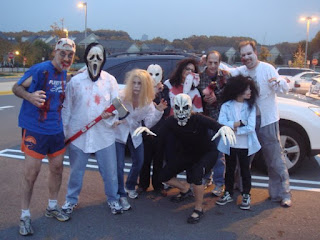 I don't know, I may want to do the Zombie Run. Back when we lived in Maryland and I was working for Fleet Feet Sports in Gaithersburg, we had a zombie run of our own for our Halloween-themed fun run. I was one of the zombies (that's me all in black in the front. We were awesome) and we had an absolute blast scaring the runners during the run. I think I'd be scared out of my mind if there was a zombie chasing me. I know I'd scream through the whole thing. And in addition to avoiding being touched by zombies, there are obstacles and things you need to clear along the way. It all sounds incredibly terrifying. But that could be fun, right? I believe you have the option of being either a zombie or human. I may need to look into this more seriously....

What are your thoughts on novelty or themed runs? Yay or nay? Would you or have you ever done one?