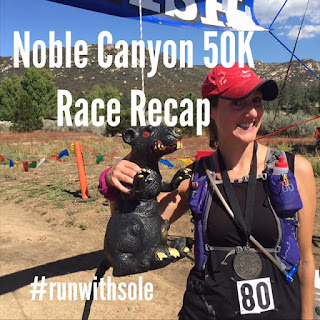 The 2015 Noble Canyon 50K is in the books as one of the toughest races I've done. This was the second time running this race and this year was tougher than last year. And while it's a race that kicks your butt, I do think it's a rite of passage for any San Diego ultra runner. It's part of the San Diego Slam, which includes the also tough PCT 50, SD 100 and Cuyamaca 100K. I've done 2 out of the 4 in one calendar year but not sure I'll ever do the entire slam in one calendar year. That's crazy tough!

The week leading up to the race was not a good one, as I mentioned in last week's Thinking out Loud Thursday. In fact, the entire last several weeks have been tough more on a personal level with some stressful situations at home. I firmly believe mental and emotional stress far outweigh physical stress. So I felt pretty depleted by the end of the week. But I made it to Pine Valley Friday night with my friend Jean and we stayed at the lovely Pine Valley Inn.

Race morning began early for me as I did not sleep well. Awake at 3:00, I just laid in bed until it was time to get up. I was congested with a headache, so that wasn't giving me much confidence. But we got ready and headed over to the race start. After our check in, the race started at 6:30am and off we went. It was slightly chilly but I knew it would be hot before too long. Weather reports were saying high of 87 in Pine Valley. Yum.

As we made our way on Pine Creek Road and onto the Noble Canyon Trail, we could immediately see differences in the trail from the last time we were there over the summer. The rains over the past few days really gutted sections of the trail and there were more rocks than ever on the already-rocky trail. It felt like we were running in rocky riverbeds which just isn't comfortable. Things were still feeling ok when we got to the first aid station so we just checked in and then kept going. Then we started to climb. For some reason my shoes were feeling really loose. I don't know if it was just the very unstable terrain combined with the climbing that was causing my feet to move around in my shoes more than usual or what but my feet were screaming by mile 6 or so. When we got to the second aid station at Big Tree I tightened them up and that helped, though there were some blisters I could feel from the movement. Awesome.

After Big Tree we continued to climb to Penny Pines. The sun was in full force at this point and while it was still tolerable, things were heating up. My nose had been running since we started, which is usual for me, but it was ridiculous this time. My nose was already chafing from wiping it with my buff. So I mustered up some confidence and blew my first snot rocket. Now before you tell me I'm hideous, let's just understand how monumental this is for me. I hate snot. Like with a passion. I'm getting nauseous just typing this. I can handle vomit and other disgusting things, especially since I have 3 kids. But for some reason snot makes me sick. It's awful. So I've been hesitant to try the snot rocket thing because I was afraid I'd get it all over me and then vomit. But it was a matter of necessity at this time and I have to say, it was quite successful. And I felt much better because I could breathe. That is always helpful. So if for no other reason than the snot rocket, the race was a success for me.


When we hit Penny Pines aid station, we fueled up and filled up our packs and headed onto the PCT. I knew this section would be a good one so we were able to get into a groove. We were about 12 miles into the race and I was finally starting to feel good. We ran into friends Vito and Dave, who were just running the course to see friends and it was a great morale boost. As we continued running, we were talking about my feet hurting and how my rhythm was off. This somehow led to Jean making an awesome Wham! reference (Careless Whisper - "guilty feet have got no rhythm"), which I proceeded to sing for several minutes. We got to Pioneer Mail. There's an aid station here but you must first run past it, run up a tough climb and then come down. Rude. It was a bit windy up there but not too bad. At the aid station they had pickles, which I enjoyed. I think I had 3. The salt and vinegar really helped to settle my stomach. We got some more ice in our packs and were on our way to the back part of the course that includes Pine Creek Mountain and Indian Creek trails, Champagne Pass back up to Noble Canyon.


This is the soul crushing section of the trail. It's just so hot, super exposed, has more rocks and you want to kill yourself at least once while running this section. And it's only 5 miles long, so you go through all these terrible emotions in only a relatively short amount of time. I knew the evil of this section and had prepared mentally so we kind of crushed its soul. Only until the end as we were making our way back to the Big Tree aid station. We kind of lost our mojo at that point. I told you that section will suck the soul right out of you. It will get you in the end. They had popsicles at Big Tree which was a bit boost. I filled up my pack, poured some water over my head and off we went.

At this point my feet felt like they were on fire. There was nothing I could really do other than just keep going, albeit painfully. We hobbled through more rocks and riverbeds only this time on tired legs, so footing was very unsure for me (guilty feet have got no rhythm). When we got to the last aid station we were getting down both mentally and physically. Wham! was no longer keeping me occupied. We got an awesome dousing of ice water, I drank my final shots of cola and off we went. The last 4+ miles were not pretty by any stretch of the imagination. It was very hot, my feet hated me and we still had rocks to trip over. But eventually we made it to the finish. We both bested our times from last year, so that made us happy. We stuck around the finish area for a while, chatting with friends, eating and just trying to cool off. We checked the weather and it was 90 when we finished. They had some tents and misters going, so that was helpful.


We hit Calvin's on the way out of Pine Valley for a celebratory beer. We cursed Noble Canyon a few more times, vowing to never run it again. The heat, the rocks, the 5200+ ft of elevation gain. It's a tough course. But now that I'm a few days out from it, I wouldn't say never again. Who knows, some day I may want to do that slam. But not any time soon.