Running Alone vs. Running with a Group 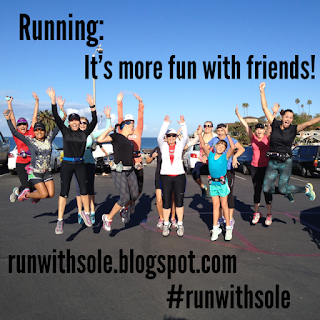 One of the best things about running is that it's an individual sport. You are in control of how and when you run and can be as competitive as you'd like. You can race. You can not race. You are not bound by any schedule other than the one you choose for yourself. But one of the worst things about running is that it's an individual sport. It can get pretty lonely out there. All that lack of rules and set schedules can get boring and can zap your motivation. It's hard to motivate yourself without that added level of accountability of meeting someone to run. So today we're talking about running alone vs. running with a group.

Before we get started, this part is of the Tuesdays on the Run blog link up with My No-Guilt Life, MCM Mama Runs and Run the Great Wide Somewhere. When you're done reading here, be sure to check them out! 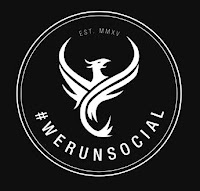 The Friend Factor. Running with groups is how I've made many of my friendships. Now, I'm not saying that you are guaranteed to make friends. I know some people really don't like or feel comfortable joining groups of people they don't know. I get it. It can be a little scary to put yourself out there. But if you show up to a group run, and keep showing up, chances are you'll meet someone that not only runs the same pace you do, but also has similar interests outside of running and may even be worth hanging out with in a non-running situation. And keep in mind, not all groups have to be in-person. If you really are not the group-joining type, try an online group. There are tons of virtual groups through social media that still allow for camaraderie and support though your miles are usually run alone. In fact, I have "met" a lot of people I "run" with online. Most recently, a large group of us met at the Phoenix Marathon and formed the #WeRunSocial group, under the guidance of our fearless leader Brian (aka Pavement Runner). We strive for ALL runners, fast or slow, new or veteran, to feel part of a larger community group, where we all support one another's goals, big and small, running related or not. It's awesome.


The Fun Factor. Running with a group is kinda fun. When I first started running marathons in the DC area back in 2004, I trained with a charity group called AIDS Marathon. We raised funds for a clinic in DC. Anyway, we had a fairly large pace group and by the end of our training, we were all pretty much BFFs. I still keep in touch with several of them, the most notable my friends Lynne and Betsy who are two of my closest and dearest friends. You get pretty darn close to people when you run with them for hours on end. We would tell the most ridiculous stories, sing songs and just have awesome adventures together. I remember one run in particular where the trail was extremely muddy. We had some crazy rains the summer of 2004 and parts of our running route got washed out and pretty muddy. Even with avoiding the mud piles, we were losing shoes left and right. And the sounds our feet made in the mud left our abs sore from laughing instead of running. Good times. And since I've moved to San Diego, I've met some amazing people and had laugh-so-hard-your-abs-hurt fun times, both through the groups I've coached but also through groups I belong to such as the Dirt Devils and the San Diego chapter of Moms Run This Town (MRTT).

The Fight Factor. Running with a group gives you the fight you need to get through those hard miles. I have had some low miles during runs that I know I would not have been able to get through without the help from my running group. Much like a group of cyclists helps each other when riding together, a running group does the same. We will position someone in the front who can keep the pace at the right speed or put someone who's having some trouble in the middle so they're with someone at all times. There are a lot of different ways the dynamics of a group can work to help everyone get the miles they need in the best way possible. And the best part about helping one another is no one gets left behind. 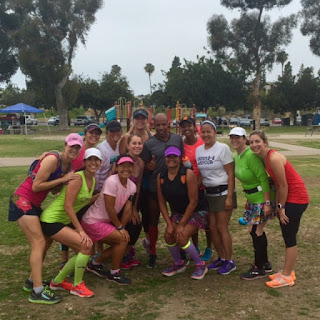 The Famous Factor. Running with a group gives you the opportunity to see famous people!! Ok, this may be a stretch but if it weren't for meeting the girls in the MRTT group for an event this past Sunday, I never would have met one of my heroes, Meb Keflezighi. We were in Mission Bay going over speed drills with Mick from Movin Shoes, when none other than Meb came running by. We were just talking about him and Mick was using him as an example of running form and low and behold, there he was. It couldn't have worked out better timing wise, though Mick swears it wasn't planned ;) Anyway, we all started hooting and hollering for Meb and he stopped to come over and say hi. I mean, who can resist a group of women cheering for them? Anyway, he greeted each and every one of us individually, shaking our hands as he did so, and asked if we wanted to take a group photo (um, YES!). Then, after the photo, he shook the hands of the ladies he missed before the photo. He then said he had to take off and off he went. Super classy guy. I'm still beside myself that we just randomly saw him and he took time out of his workout to talk with us. Go Meb!

What are your thoughts? Do you prefer a group or running alone?