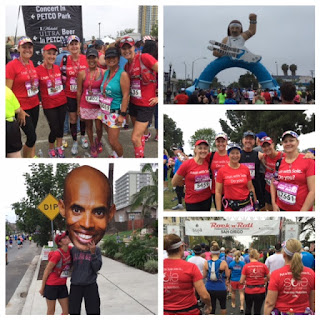 This past weekend was the goal race for my spring program: the Rock n Roll San Diego Half Marathon.

This race is special to me for a number of reasons. It was the first marathon I did here after moving to San Diego and it was the first marathon I did after having my twin girls. Last year I ran the half with some good friends and we had a blast. So, I figured this year let's make it even more fun by training a group for it! And fun it was! Besides, the San Diego race was the very first in the Rock n Roll series. There are a ton of great stories associated with it, such as local hero Meb Keflezighi always running it (and setting records) and the now-world-record-holder Harriette Thompson making history here.

Before I get started, this post is part of my friends #TriumphThursday blog link up. Check out friends Smitha, Carlee and Linzie and see all the Triumphs going around the world today!

Back to training! The training program started back in March and we met every Sunday at Moonlight Beach for our long runs. It was a great group of people running and training for all different races. Some were running the Rock n Roll, some were running other half marathons and others were training for longer distances in the future. But regardless of the reason, we all came together and became a family! Meeting every week for 12 weeks will do that for a group of people :) And honestly, the training is the hard part. Getting up early, getting in all your miles around life obligations, dealing with injuries, vacations, work, etc. It's hard and compared to all that, the race is easy. It's the victory lap you take after all your hard work.

After 12 weeks of training, finally race week came! It was time to take our victory lap! We decided that those of us coming from North County would take the Coaster down on race morning instead of trying to drive. Either way would require an early wake up call (3:00am!) so this was the poison we chose. But first, it was time to go to the expo. A few of us went Friday. We didn't stay too long because I had my girls with me and one of them, as it turned out, wasn't feeling well. But we did take a moment to snap a few photos!


The North County girls met at 3:45am. Maria had a snag getting to our meeting place due to an accident, so we had to alter our meeting spot. Not an easy task at 3:45 in the morning. Finally, everyone was in the same car and on we went to the Coaster. We got to the Encinitas station and right on time, the train arrived. So we settled in and relaxed, ate our breakfast and chatted for the duration of the ride. We arrived at the Old Town station and took a shuttle to the start in Balboa Park. We met up with Chris, another member of the group, and Dan, a private client of mine. We weren't able to find a couple of other runners but knew they were there somewhere!
After some final trips to the restrooms, we got into the corrals. The hordes of people were a little overwhelming. I am not a huge crowd person, so the tightness of the start corrals kind of get to me a bit. But the one good thing is that it warmed us up until it was time to start!

Overall, it was a good race. The sun was no where to be seen, which is always a good thing. But it was humid! It may not have been humid by east coast standards, but it was humid for us west coast wimps. I am a heavy sweater to begin with but I looked like I jumped into a pool by mile 1. Good thing there aren't any photos.... Oh wait.

I normally don't run the target races for my groups. I like to be along the course to cheer everyone on and at the finish line in order to see everyone finish. To capture that moment of triumph! But with a race this size, I didn't think I'd be able to see anyone finish, so I decided at the last minute to actually run it with some of the group. I'm really glad I did. Launa and I ran the whole thing together and I was able to see everyone after the finish. You can see in the pics below just how proud they all are of themselves. They clearly kicked the ass out of their victory laps. This course isn't exactly easy. There's a pretty significant downhill section that lasts for a while. If you're not used to it, it could really do a number on your quads and knees. Add in the humidity and there were a lot of cramps and unhappy people out there. But my runners did AMAZING! They all finished strong and wore their medals with pride! There were even a few PRs among them! So honored to be a part of all of their goals and dreams. It means the world to me and I'll never take it for granted!


Congrats to all of the RnR runners! And to my runners, thank you for letting me in on your goals! Can't wait to run with all of you again!
Posted by Run with Sole at 8:43 PM