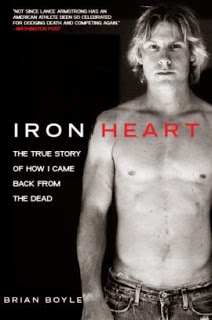 If you're anything like me, you love a good book. Most of the time, I read fiction. I like to escape when I read, so I opt for non-thinking books most of the time. I'll take a good mystery or crime story any day but every now and then you'll find me glued to a non-fiction book. Yes, it's true. But most of the time, if it's non-fiction and I'm reading it, it's running- or endurance-sport related. In fact, today I've joined the Tuesdays on the Run link up and we're talking about inspirational running books and movies. The Tuesdays on the Run link up hosted is by My No-Guilt Life, MCM Mama Runs and Run the Great Wide Somewhere. Check them out!

Joining the linkup today brought me back to a book I read about 5 and a half years ago but is still one of the  most inspirational stories I have ever read. It's the story of Brian Boyle, a guy who died and lived to tell about it. He describes his ordeal in his book Iron Heart, The True Story of How I Came Back From the Dead.


Brian is a young guy, not even 30 years old, and he's seen more sadness, pain and despair than most people do in their entire lives. When he was 18 he was in a horrific car accident that should have killed him. It did kill him, he was pronounced dead 8 times, but he fought and came back, literally, from the dead. I won't go into the specific details of his accident and his injuries because you should read his amazing book. Just know that the story of his accident and subsequent recovery is one of the most inspirational you'll ever read.

Brian had to come back from a horrific accident. He was in a medically-induced coma for months. Once he came out of it, his doctors weren't confident that he'd ever be able to live outside of an assisted living facility. But he eventually fought his way out of his hospital bed and back home. But it was no easy road ahead of him. Brian spent years working tirelessly to overcome his injuries. He was told he probably would never walk again. But he somehow found the strength, through the love, support, and courage from his family and friends, to fight on and work. And he did work. Three years after his accident Brian finished a half Ironman triathlon (70.3 miles of swimming, biking and running). Then 45 days after that he completed the granddaddy of triathlons: the Ironman World Championship at Kona, Hawaii. This is 140.6 miles of swimming, biking and running. And he did it. He's still doing it too. He's competed in countless races since then, just recently completing a 100-mile race. He's also a spokesperson for the American Red Cross and works to raise awareness of the importance of blood donation, something that saved his life. 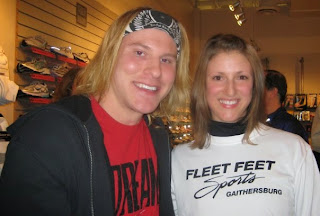 I had the opportunity to meet Brian and his family back in 2010. I was working as the Marketing Director for Fleet Feet Sports in Gaithersburg and planned all their events. We were lucky enough to snag Brian for a book signing at our weekly Fun Run. His whole family was there, including his bulldog, Daisy. It was great meeting everyone. They are all just regular people, doing extraordinary things. And even with the "fame" and glory, Brian and his family are some of the nicest people I've ever met. Brian and I have remained social media friends and it's been awesome seeing all the things he's accomplished through the years.

His book was about living through tragedy and coming out on the other side. Some of us will never experience the magnitude of tragedy Brian faced, but we all go through our own personal tragedies. Knowing Brian's story, I think, may help you find the strength and courage to keep fighting through your own tragedy. Even when it seems like all hope is lost, with the support and love from your network and the resolve to keep fighting, you will get through.
Posted by Run with Sole at 4:20 AM