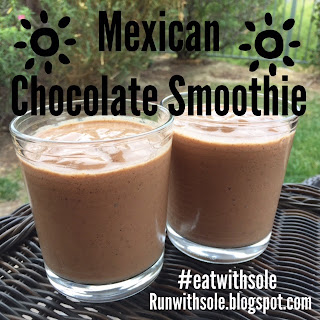 It's Cinco de Mayo! But instead of doing tequila shots, let's drink to our health! In preparing to write up this post, I wanted to make sure I understood the significance of the day. According to this CNN article, Cinco de Mayo isn't the celebration of Mexican Independence from Spain. This day is actually the recognition of Mexico's victory in a battle against the French army.

I wanted to mark the day with something healthy that showcased the flavors of Mexico and South America. Behold my Mexican Chocolate Smoothie! Ok, so it's not exactly authentic Mexican chocolate, I did want to celebrate the day with some Mexican-inspired flavors.

Mexican chocolate is different from other chocolates in that is is flavored with spices such as cinnamon and other flavors such as vanilla and almond. It's used for hot chocolate and specialty dishes such as Mexican mole, among other delicious things. And while this smoothie doesn't exactly have Mexican chocolate in it, it does have cacao nibs and powder, which is a South American health superstar. It's full of antioxidants, iron, magnesium, calcium, fiber, protein and so much more. It is the base of chocolate products and provides a rich chocolate flavor. I've added a little cayenne to give it a kick. Couple that with tropical fruits commonly produced in Mexico and South America and you can have a celebration-worthy smoothie any day of the year. Blend it up and drink to your health!

Add the ingredients to your blender, liquids first. Blend on high, adding more coconut milk if desired. Eat and enjoy!