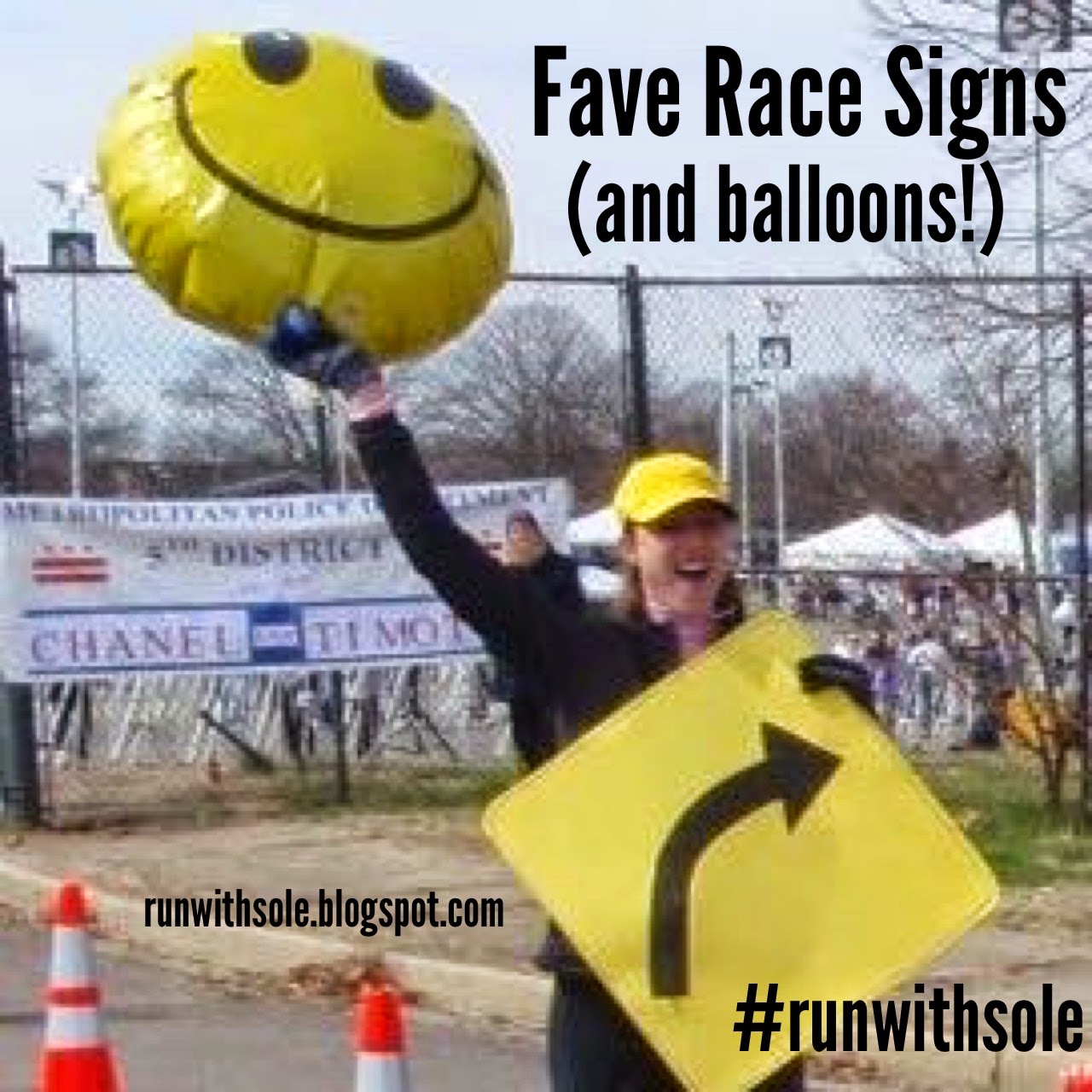 I remember running races where the best thing to look forward to was the banana they handed to you as you crossed the finish line. Now there are medals and beers, cold towels and Tiffany necklaces. So much good stuff! I also remember running races where you were lucky to pass by onlookers that didn't look at you like you were crazy, wondering what you were running from. Now spectators are just as much part of the race as the post-race goodies, finishers medals and overall race atmosphere. But being a spectator comes with great responsibility. Not only are you expected to cheer and shout, wave a cow bell maniacally and wear a crazy costume, you are now expected to hold an incredibly clever and witty sign. These signs are staples of races. They help give us runners a focus, something to laugh, cry, punch or high five during our race. In fact, a well-placed spectator sign can make all the difference when legs are screaming and spirits are low. Here, I describe my most favorite sign I held as a spectator for a race. Thanks for reading and if you're here from the Tuesdays on the Run link up hosted by My No-Guilt Life, MCM Mama Runs and Run the Great Wide Somewhere, welcome!
The above picture was taken at the 2009 Washington National Marathon and Half Marathon (now known as the Rock n Roll DC Marathon and Half). I coached a group for the race and it was the first half or full marathon for most of them. Needless to say, everyone was extremely excited and nervous about the race. Since I rarely run the races for which I coach a group (so I can see everyone at the finish), I planted myself at the finish line once everyone got on their way. Though, this time I had the biggest, brightest, most ridiculous balloon I could find. I wanted to make sure everyone saw me from 4 miles away. The best part was when we were looking at everyone's official finish line photos after the race, you could see my big-ass balloon bobbing in the distance.
In addition to this big-ass balloon was The Sign. During our training, we ran along the Rock Creek Trail, which spans from Maryland into Washington, DC. We started at Lake Needwood in Gaithersburg, Maryland, the north end of the trail. We ran out and back each week for our long run. As you come back into Lake Needwood on the trail, about a quarter-mile from the finish of the trail, there is a sign with an arrow indicating a curve in the trail that's hidden due to the trees. This sign served as the carrot dangling in front of us, guiding us back to the finish. Imagine, after a long 11.75 or 19.75 mile run, seeing this sign and knowing you're *thisclose* to being done. Well, the husband of one of our runners made a replica of the sign and I planted myself a quarter of a mile from the finish line of the race. My balloon and I, and that sign, were the beacons that guided our runners to victory :) 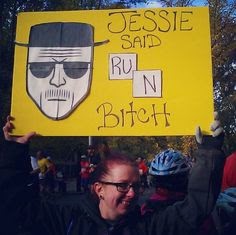 As a runner, I love seeing the spectator signs. Not only are most of them hilarious, reading them passes the time really nicely. I saw my all-time favorite at the Marine Corps Marathon in 2014. It said, "If marathons were easy, they'd be called your mother." How awesome is that? I had never seen it before but apparently it's pretty popular. Yeah, I love the motivational signs as well, but it's the humor that really does it for me. But fear works too. During the Carlsbad Marathon in January, I was running along and saw a woman holding a sign with a drawing of Jesse Pinkman from Breaking Bad that read, "Jesse says 'Run, Bitch!'" If you've seen the show, you know that's how Jesse talks. Anyway, I laughed and acknowledged the woman for her sign (I love Jesse Pinkman). She got really excited and screamed at me to RUN, BITCH! It kind of scared me, so I sped up and ran away as fast as I could. Well, this was right before the turn around for one section of the race, so I ended up passing her again. She recognized me and screamed at me again to RUN BITCH as I ran by. That woman scared me! But it was a effective. I ran like a bitch after seeing her! (This is not a pic of the sign I saw but one just like it from Pinterest).
What's the best sign you've seen in a race? Which do you prefer, funny, inspirational, tough love?
Posted by Run with Sole at 9:26 PM