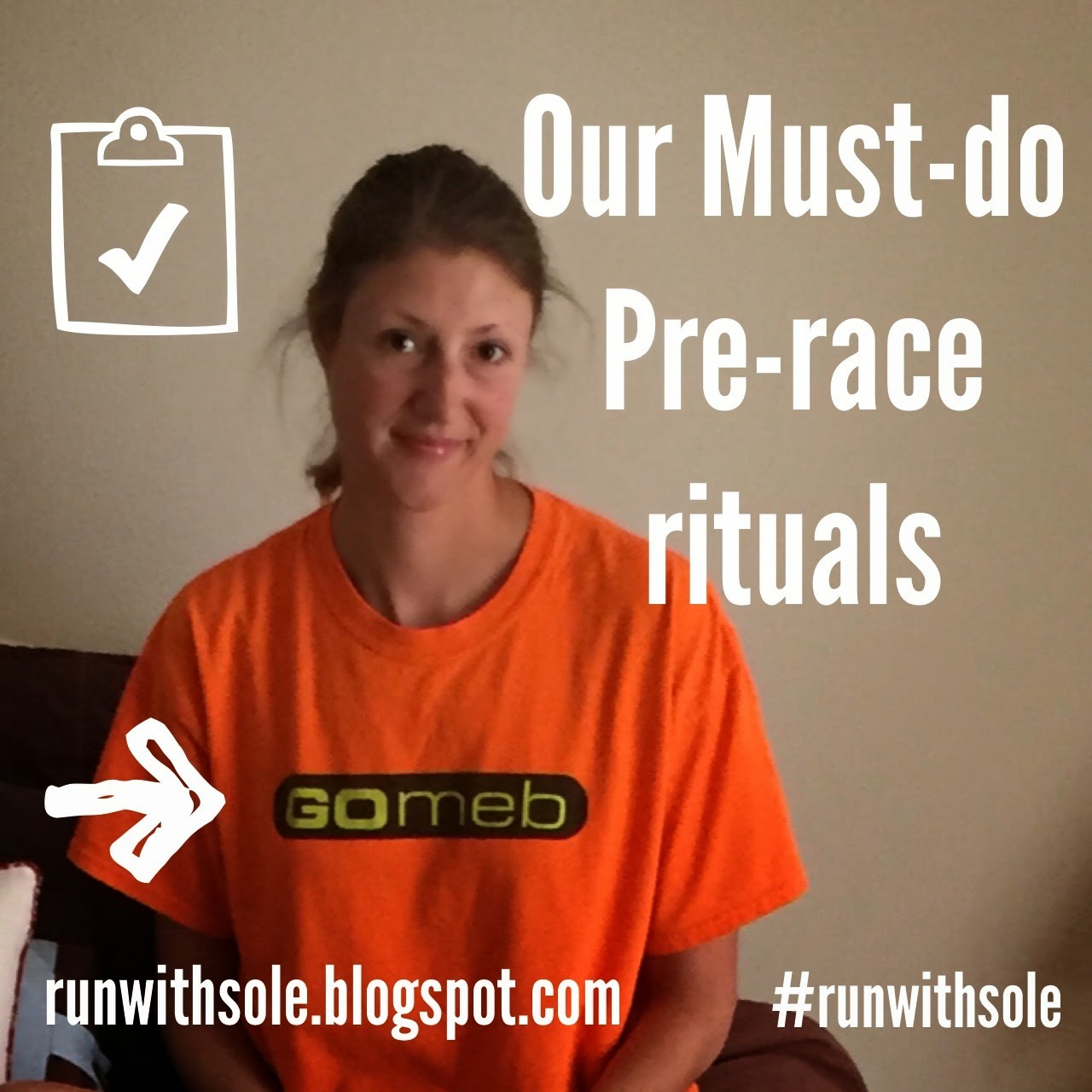 Like most athletes, we runners are a superstitious bunch. Or maybe it's just me. There are things I absolutely must do in the days leading up to the race and I am certain I'm not alone. Sure, there are the things I do to help prepare for the race: taper, hydrate, eat clean, etc. But then there are the things I do that, in all honesty, probably have no effect on my performance. Since some friends and I are headed to Phoenix this weekend for the Phoenix Marathon, I thought it would be fun (and only slightly humiliating) for me to compile a list of my must-do pre-race rituals. Keep in mind, this isn't a "How to Prepare for Race Day" post. See my preparing for race day posts I did for the Carlsbad Marathon last month (this one and this one). This is a list of the silly and only-slightly-helpful superstitions and rituals I do before a race. To clarify, superstitions are items you have to wear, touch, etc., in order to be successful. Rituals are acts you do before an event that you believe will ensure success. Going through even the most ridiculous rituals is a way to deal with nerves. We have only so much control over what happens to us during a race, especially a marathon. Rituals and superstitions give us a little bit of control. Feeling like we're in control of something can help ease anxiety and fear. Of course, we need to keep things in check. If you can't carry out all your rituals, it doesn't actually mean you'll fail. You will be ok! At least I hope so ;)

Edited to add that I've linked up with the Tuesdays on the Run link up hosted by My No-Guilt Life, MCM Mama Runs and Run the Great Wide Somewhere. Thanks for reading!

Paint my toes. It's always a good idea to trim your toenails the night before your race. Even though your shoes should be large enough that your toes don't hit the top of your shoe, too-long toe nails can cause other troubles such as cutting the neighboring toe. I not only trim my nails but I paint them too. And I paint them red. A few years ago, I came across a number of articles describing research into what makes athletes successful. A lot of the research actually looked at the color red and when athletes wear red, they often win. Red is a color of dominance, after all. This may be the reason why I chose red as my company's color :) So while I may not outwardly wear red, I have it on my toes and it's a subtle reminder to myself that I will kick butt!

Wear my Go Meb shirt to bed. I got the above Go Meb shirt several years ago at the expo for the New York City Marathon. Sketchers, Meb's shoe sponsor, was handing them out and of course I needed one. Meb Keflezighi is one of best American distance runners in history. He won the silver medal at the 2004 Olympics (which was the best an American man had done in over 30 years), has won the New York City Marathon and most recently was the first American man to win the Boston Marathon in over 30 thirty years when he won last year. I think Meb's lucky number should be 30. Anyway, at first my Go Meb shirt was just another sleeping shirt since it's 1000 times too big. But over time it's become something that really inspires me. I wore it to sleep before a race that turned out to be a great one for me and it's been my pre-race lucky charm ever since. I don't know what I'll do when it's worn to threads.

Mindless TV and Social Media. Most people don't like to wake up too early before a race so they can get as much sleep as possible. I don't usually sleep well the night before a race so I'm always up early with enough time to kill to watch TV. So while I'm eating, I watch mindless TV which typically includes reruns of Beverly Hills, 90210 on the DVR (don't judge me). Honestly, I can't even describe why I watch this show. I know it's awful. I do not believe it was the best show ever made. I think it's just a comfort thing. I watched it when it was first on TV when I was in middle school until its bittersweet end after I graduated from college. Watching it before a race comforts me and eases my nerves a bit. And I've been known to think about its ridiculousness at low times during a race. It has taken my mind off hard efforts more times than I can count. Why couldn't Dylan stay with Brenda? Why was Steve such a dork? How did this show stay on the air for so long? These are some of the things I've pondered during races.

And when I'm racing out of town or don't have a way to watch my beloved 90210, social media fills the space nicely. Mainly I linger on Instagram. As you can imagine, most of the people in my feed are athletes of some sort and it's pretty motivating to scroll through everyone's pics of their runs, races, motivational quotes and more. There have been a few quotes that get stuck in my head and I can chant them to myself throughout the race. It helps tremendously so you Instausers, keep posting your inspirational stuff!

Visualization/Meditation. This is one ritual that can actually help your race. Visualization is something sports psychologists recommend to athletes regardless of their ability and competitiveness. Everyone can benefit from visualizing their performance. It helps get you into the right mindset and even prepare the brain for competition. This can ease nerves and when you "see" yourself succeeding, you get a boost in confidence. I will start the whole visualization process well in advance of the race so I can start mentally preparing for it. I picture myself getting things together the night before, going to bed, getting up, eating, getting to the race, warming up, running, etc. It helps me feel more at ease with everything because I can "see" that it all works out. Meditation just helps center my focus rather than get all worked up about ALL the things I need to do for the race. It helps me prioritize what needs to be attended to at that moment and not worry about what can't be attended to until later. I highly recommend it as a way to ease stress not only for races, but life.

Scream. You read that right. I scream as a way to relieve stress. I'm not talking scary screaming at the top of my lungs. I let out some yips and yells here and there as I'm making my way to the starting line. I try to be discreet about it when I'm by myself because I don't want to scare anyone :) But when I'm with friends, I can typically get them to join me in some way and I definitely hoot and holler with my running program participants before their races. If I can't scream, I'll disguise it as singing. I'll sing silly songs as a way to relieve stress. I feel like it really helps me relax and it's just become one of those rituals I have to do before that gun goes off.

What are some of the rituals you perform before a big event, running or otherwise? If you race, what are some of your pre-race rituals?
Posted by Run with Sole at 5:26 PM