Inside the Mind of the Non-running Runner 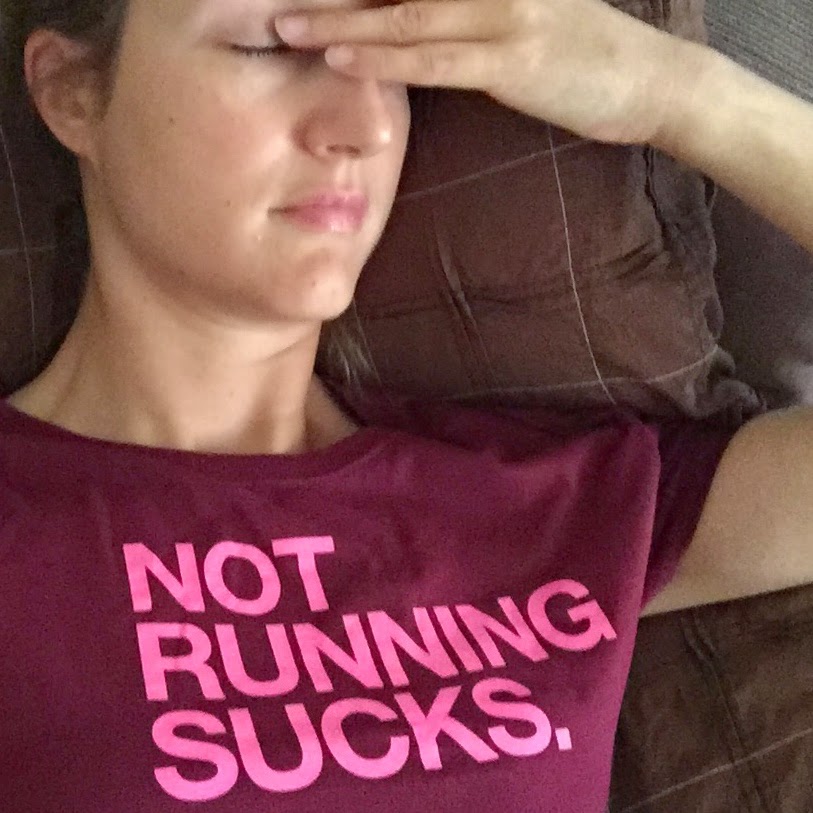 Being sick this past week was really horrendous. Not only was I feeling shitty but I felt so badly, I couldn't run. Granted, the first couple of days I wasn't feeling well enough to run. But then I was pissed that after a few days of rest, I was better but still not well enough to run. So not only was I feeling badly because of being sick, but I was grumpy because I couldn't run on top of everything. It reminded me of times when I was healthy but yet couldn't run due to injury. Being a runner who can't run is really agonizing.


Periods of time of non-running are very hard for many runners to deal with, for a number of reasons. While most runners actually look forward to the little break for a welcome rest, others completely freak out. Panic sets in after a few days. Thoughts come flooding in: "Will I ever run again?" "Will all the hard work I've done go to waste?" "What if I can't get back to where I was?" And so on. Here's a look into the mind of the runner who just can't run. WARNING: it isn't pretty.

First and foremost, injuries and illnesses cause physical pain. You've pulled a hamstring, torn a ligament, have a cold or flu. It hurts. It sucks. While this is something most people expect to deal with when sick or injured, what may be more unexpected is the emotional pain this can bring. Many runners can get slightly depressed when they're dealing with an injury, especially for those that require weeks, if not months, of rest. Most runners can tell you that running is more than just a hobby for them. It's part of who they are. And when they can't run, even for a few days, some runners don't know how to deal with themselves. They suddenly have all this time and can't do the one thing they love the most. The non-runner may not completely understand this, and that's the main reason why I'm writing this. Some non-runners actually think we would enjoy taking time off and we're crazy for getting crazy because we can't run. True, we are crazy because we can't run. Here's why:

Many runners use running as therapy, myself included. When we are feeling stressed and frazzled, running serves as a way to release that stress. We take out our frustrations on the roads, trails, our shoes. We blast music, we run fast, we get it all out so when we're done, we don't punch people in the face. When we can't get do this, we don't know how else to deal with our stress. Instead, we feel helpless.

Another aspect that may be lost for runners with injuries is the social aspect of running. For many runners, their runs with their friends are much-anticipated social gatherings. This is the time they catch up and talk about what's going on in life. When they can't participate, injured runners often feel left out of their social circle, and for some, cut off from their social support. Personally speaking, the time I spend with my Sole Sisters is one of the highlights of my week. And social media DOES NOT HELP at all. Seeing pictures of all my friends happily running their weekly long runs or accomplishing some feat without me is kinda disgusting. Ugh.

It's really important to look at your time differently while injured, or sick. While it is heartbreaking not being able to run, you have to use this time to take care of yourself. You're injured or sick because your body has a weakness. You have to help that weakness get strong and the only way to do that is rest. Injury or illness is your body's way of telling you to back off. Try to figure out why you got injured in the first place and get stronger. In the case of sickness, if you don't take the time to rest and recover, you will only prolong your illness and possibly make it worse. That's what I had to remind myself of all week. And this is what I came up with after dwelling on it all week:

Try your best to stay positive and upbeat. While it's so easy to get depressed over your not running, it's important to understand that this happens to most runners at some point during their training. You are forced to take a few days, maybe even a week, off from running. Sometimes more. But remember, you will get back on the roads and sometimes the only way to get there is by resting and taking care of yourself. If you don't take the time to get better, it will only take longer to recover. Trust me, this is not the end of your running career. It's just a minor setback.

Find other ways to cope with stress. If other forms of exercise are out, returning to other interests that may have been ignored for some time is one way to deal with stress. Start a new book, learn how to knit, or catch up on your movie watching. Whatever you find enjoyable, take this time to reintroduce yourself to it. During this week of being sick, I returned to sleeping! It sounds ridiculous but I wasn't waking up early to run so I was actually able to sleep a bit each morning. This is the main reason I got better.

Stay in touch with your running friends. Call, email, text, whatever you did to set up your runs, do it now. You know that you don't have to just see each other when you're running. Set up a time to see a movie, grab dinner, or just talk. Let your friends know that you're feeling left out from the running talk and even though you're not running, you still want to stay in the loop. But do expect conversation to include running talk.

Talk about how you feel. Let the people in your life, both running and non-running, know that you are going through a hard time. They will be there to listen and be a source of support as you get through your injury. So if you don't want to really listen or can't participate in the running talk, let them know. Or make plans for when you are back on the roads.

Enjoy yourself. If your injury allows it, try out a new form of exercise. Go swimming, go for a bike ride. Try yoga. Work on your strength training. This is actually quite important in preventing future injuries. Chances are whatever you end up doing will help keep your fitness up so when you do return to running, you're not starting completely from square 1.

Dealing with injuries or prolonged illness is hard for many runners. But if you accept the fact that you're injured and use the time to find out other things about yourself, it may just be a little easier to move forward.
Posted by Run with Sole at 1:09 PM