In case you haven't noticed, I like soup. Like a smoothie, it's the perfect meal. You can put lots of nutritious, healthy, delectable foods together, that perhaps you wouldn't really eat much on their own, and blend them up into a fabulous meal. This soup is no exception.

Sweet potatoes should be a staple in anyone's pantry. Potatoes in general get a bad rap because carbs themselves get a bad rap. But, let's face it, there are good carbs and bad carbs. Processed, refined carbohydrates are bad. Think white bread, pastas and baked goods. Carb sources that are whole grain, whole food and in their most natural form? That's the good stuff. Sweet potatoes are high in vitamin A, vitamin B5, B6, thiamin, niacin, riboflavin, and are rich in carotenoids (powerful antioxidants known to decrease the chances of developing certain cancers, such as breast cancer). Add some fennel, which is also high in antioxidants such as quercitin and vitamin C, as well as other vitamins and minerals like iron, potassium and magnesium, and you have a combo that will help reduce inflammation, boost immunity and taste pretty darn fantastic. The carrot adds a little more sweetness (as well as vitamins and minerals) and the garlic, onion and ginger will also provide some anti-inflammatory goodness. Whip up a batch of this soup, add some hemp seeds or other protein source and have it after a workout for a great recovery meal. 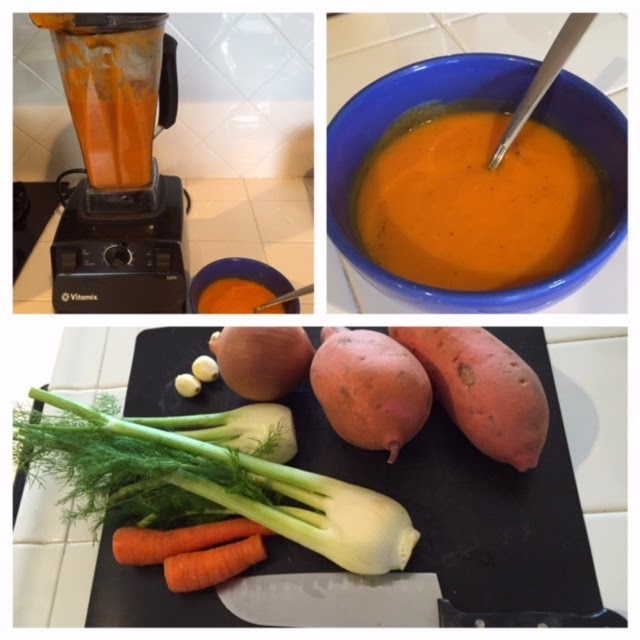 Because you're ultimately going to blend the ingredients, don't feel obligated to chop your veggies to perfection.

In a non-stick pot, add 1 tbs water and heat on medium-high heat until the water bubbles and moves along the pot. Add the onion, fennel, garlic and carrot. Saute for a few minutes, until the onion and fennel soften but do not brown. Add the broth, sweet potatoes and ginger. Bring to a boil. Once boiling, reduce the heat to low, cover and simmer for about 20 minutes or until the potatoes are softened. After simmering, I added my soup to the Vitamix to blend but you can also use an immersion blender and blend it right in the pot. Or, if those methods are not possible, you can add everything to a food processor.