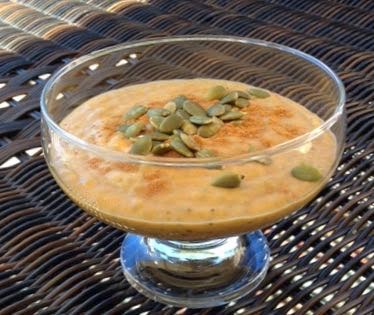 Even though, as I'm writing this, it's close to 90 degrees in the San Diego area and I'm wearing shorts and a tank top, Fall is supposedly upon us. There's pumpkin-flavored stuff everywhere to remind us that it is, indeed, Fall. Most of the pumpkin-flavored stuff out there grosses me out as it's not really pumpkin but true, pure pumpkin is a wonderful addition to snacks and meals. Not only is it yummy but it is one of the best foods out there; a Superfood, if you will. I've written articles about the pumpkin, I've posted recipes including pumpkin and I'm about to add to my pumpkin repertoire. I came across this recipe on a whim and I had to try it. I've modified it some and the result is some pretty awesome stuff. It feels decadent and naughty but this gem is less than 300 calories per 1 cup and makes for a great breakfast or snack. It's loaded with vitamins, minerals, fiber, protein and healthy fats, so don't feel badly eating it. Enjoy it and when you're done, feel free to lick the bowl. I did :)

Add everything but the chia seeds to a high-speed blender or food processor. Blend until everything is smooth, combined and thick. Pour the mixture into a bowl or container that can be sealed. Add the chia seeds and stir well to combine. Let the mixture sit for a few minutes and stir again to be sure the chia seeds are mixed throughout (the often settle to the bottom). Cover the bowl and refrigerate for at least 30 minutes but the longer the better as the chia seeds will expand. The more time they have to expand, the more your pudding will actually have a pudding-like consistency. I topped mine with a dash of cinnamon and some pumpkin seeds but add some fresh fruit or coconut cream for some added decadence. YUM!
Posted by Run with Sole at 12:21 PM