Yesterday I had one of the best running experiences in my entire running career: I ran a 5K with my 8-year old for the first time. This was such a great experience, I just had to write about it :) 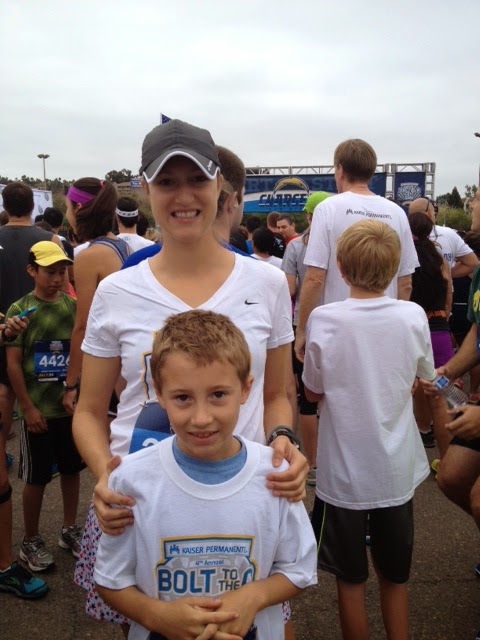 We did the Bolt to the Q 5K, which is part of the NFL 5K series. Several NFL teams participate and host 5K races at their stadium. This is the San Diego Chargers event, held at Qualcomm Stadium. We started in the parking lot, ran an out and back route, though instead of finishing where we started, we got to run through the tunnel the Chargers run through when entering the stadium. From the tunnel, we then run right onto the field and finish at the 50 yard line. It was an amazing experience I won’t ever forget.

This past Memorial Day weekend, we ran the Vista Strawberry Festival’s fun run as a family. My son has run several kids races but this was our twin girls’ first race. It was a great time for all of us. At the time, my son asked if he could do the 5K next year. Of course I said yes, but why wait until next year? A friend of mine told me about the Bolt to the Q and how she and her son do it together. After hearing about the details, I thought it would be a great first 5K for Keller. And if I’m being honest, I figured if he had a great first 5K the chances would be high for him to want to do others. And maybe even join the local kids running club. But that’s another story altogether.

We had an early wake-up call before the race as we still needed to get our race numbers. Thankfully they allow you to pick them up race morning. My friend and her son picked us up at 5:45 am and off we went to the race. When we got there, we got our race stuff and promptly put on our race shirts. I don’t typically wear a race shirt until I’ve finished the race for superstitious reasons, but Keller wanted to wear his and so we did.

After donning our race shirts and using the restroom, it was time to line up. Supposedly, there were over 4000 that did this race, so you can imagine the crowd at the start line. After a great rendition of the Star Spangled Banner, we were off. My friend and I decided to let our boys kind of go off on their own since they would probably be running faster than us. We were able to see them ahead of us for most of the race. The course itself is pretty easy and really is a great course for a first time 5K. It’s truly out and back with just a couple of bump ups here and there. At some point before the half-way point, I was getting nervous about Keller running on his own. If he needed to stop and walk, I was worried he would get overwhelmed by all the people. I had to run to catch up to the boys and with a mile to go, I caught them. I was so happy to have that last mile with them. Seeing them deal with the mental aspect of running was kind of amazing. My friend’s son is older and has done this race before. So he was kind of coaching Keller in how to run that last mile, telling him to keep his pace under control, etc. I see a future running coach in him :) 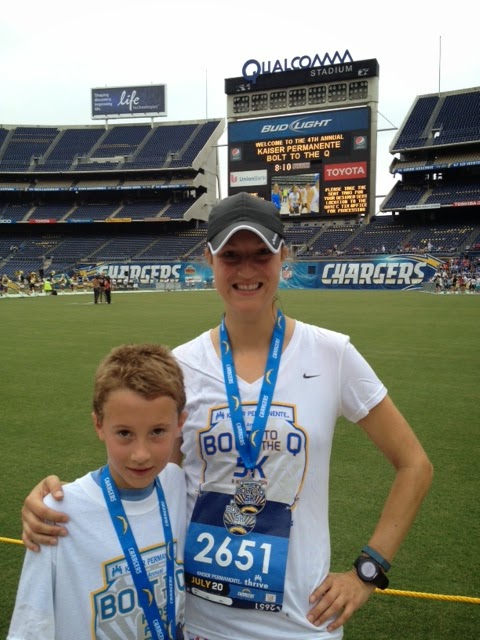 Finally, after a small hill, we returned to the stadium parking lot. We could see the straight-away to the players’ tunnel and the field. Keller took off. Sean and I both looked at each other in amazement. Sean even asked me where Keller got his energy. This coming from a 12-year old! As we approached the tunnel, Keller stopped. I think he thought that was the finish line (there was a Mile 3 sign there). I took his hand and we entered the tunnel. We held hands the whole way to the finish line and it was absolutely one of the sweetest race finishes I’ve ever had. I could tell Keller was so proud of himself for running the whole thing and finishing strong. He was super tired and said he wasn't sure if he could do a longer race. Of course I told him he could if we trained for it. It was kind of exciting to think that he's thinking about future races already. By the way, Sean came out of no where with a finishing kick that was pretty strong and blew by us both. The stinker. 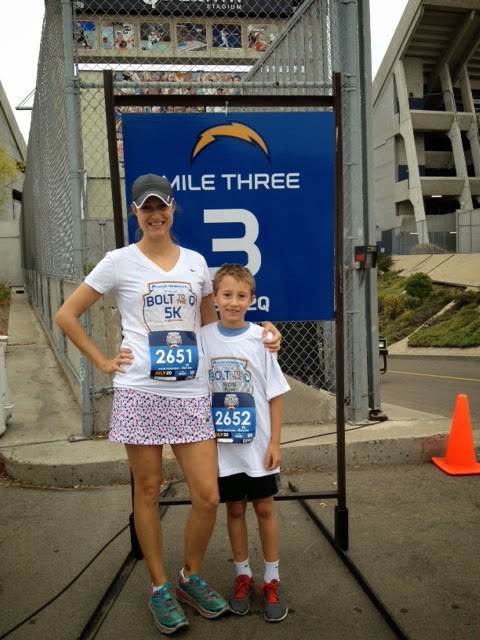 What is even more exciting is that we’re in the footage of the race from two different news programs! You have to watch the entire videos in order to see us but we’re there! In the one from NBC San Diego, towards the end of the video, you will see Keller’s little head zoom by the camera, then me and my friends behind him. We actually saw this on the news this morning. I quickly tried to find the video online but couldn't. I emailed NBC through Facebook as well as tweeted one of the morning news anchors Marianne Kushi (yes, I am a dork). Marianne quickly got back to me and sent me the link. And shortly after that, the NBC Facebook person also sent me the link (thanks so much Marianne and NBC. We love you guys and watch every morning!). Gotta love social media. Anyway, in the one from ABC 10 News, towards the end of the video, you will see Keller and me crossing the finish line together! My most favorite memory is now on film for all of eternity! Can’t beat that!

I have to say that, regardless of whether or not Keller becomes a life-long runner and we have 1,000s of race finishes together, this will be one of my top favorite mom-son moments. There’s never another first race :) 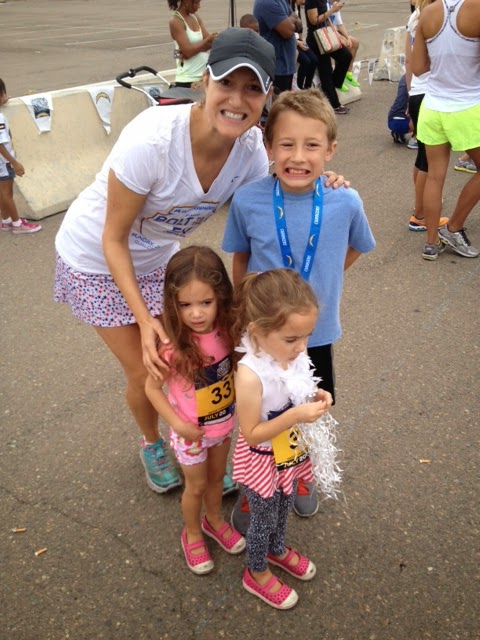 Not to be outdone, our girls participated in the kids fun run. This race was 1/2 mile, which was their longest race to date! Brenna was fine throughout the race and she and my husband alternated running and walking for the 1/2 mile. Ellen had a little trouble. I think she was overwhelmed by all the fanfare and people. We walked most of the way and at some point, she wanted to be carried. The kids run got to go through the players' tunnel and finish on the 50 yard line as well. Since Ellen and I were some of the last kids to cross the finish line, we got lots of cheers and some high-fives from Charger Ryan Mathews, whose charity serves as race beneficiary. And yes, she did wear a feather boa to the race. Sometimes you just need to wear a boa. 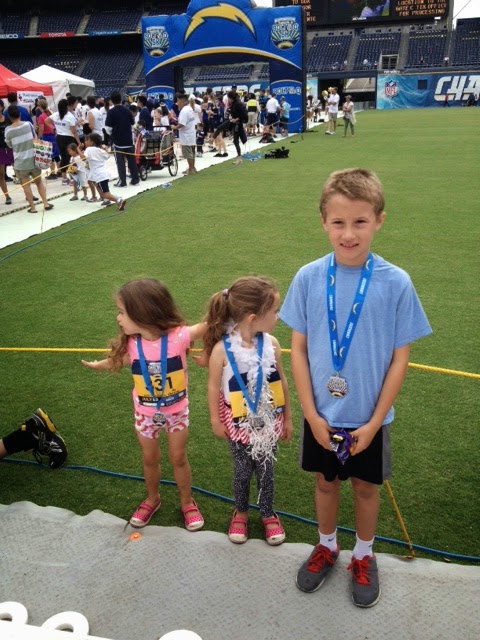