When to not give up

Yes, I'm admitting it: there are days I want to give up. Just forget it all. Throw in the towel and forget trying. Hey, I'm human too.

The past couple of months have been pretty tough for me. I don't typically talk about my tough days because my focus is to help all of you through your tough days. But I have them too. And lately, I've been having a lot of them.

Things at home have been very stressful and it's been affecting my health and my running. I've had to forgo some important runs due to both issues and illness. And while I'm still waiting to hear about what my own health issues are (according to my doctors, it doesn't look to be serious, so phew but still stressful!), I am doing my best to stay on top of training, healthy eating, kids, work, life, etc. Trust me, there are days when I feel like all the hard work is futile if I'm just going to be sick and tired anyway. If I'm doing everything right, then why do I feel this way? Well, there are no answers to this question (at least not yet) and sometimes you just have to stop and look at what's going on around you and *gasp* give yourself a break. Cut yourself some slack. When you are sick or dealing with something beyond your control, it's time to take a step back and be good to yourself so you can get through it. But, it's not a time to give up.

Really, it's when those tough days come, when we feel like giving up the most, that we have to hunker down and keep going. Sure, it's ok to take a rest day or maybe do less than what you're supposed to do, but don't stop all together. You will only add to your stress and add guilt, regret and possibly anger and frustration to the mix. But, when you think about it, when we get sick or are feeling especially horrid, it's our body's way of telling us it's time to take a break. It doesn't mean you have to stop all together, but it means it's time to slow it down a bit. Perhaps skipping an early morning run to get some sleep is the best thing to do. Or avoid intense workouts since you're more likely to cause injury when running through certain types of sickness. Whatever is on your training table, take it down a notch and get the rest your body obviously needs.

But remember, giving up shouldn't be an option. Yes, you may want to. The thought of working out may make you cry. That's ok. If it does, take the day off. But don't take so many days off that you can't get back on track. Do half your workout if possible. Just go for a walk. Whatever you have the strength and time for. Remember, cutting out all your physical activity and eating poorly will only add to you feeling badly (physically, emotionally and mentally). Just do what you can and give yourself a break. Because that moment when you can workout the way you want to? It's priceless and future success will be just around the corner :)

Posted by Run with Sole at 7:18 AM No comments:

Course of the Force

I do some strange things, I admit it. But yesterday definitely took the cake. I participated in a relay that was going on to support Make a Wish Foundation. Sounds great, sign me up! However, this wasn't your average relay. Oh no. It was a light saber relay. Yes, I participated in Course of the Force, a light saber relay that started in Marin County at George Lucas' house (Skywalker Ranch) and ran all the way down the coast to finish here in San Diego at the Comic Con International, which is a big deal in the sci-fi, comic world. All the runners carry a light saber and hand it off to the next runner. Most of which are wearing Star Wars costumes. Hilarious!


I first heard about the relay as I was researching upcoming running events in the area for my San Diego Running Examiner online column. I was inspired by the cause and it just seemed like something different and extremely fun to participate in. The event first started last year as a way to raise funds for the Make-A-Wish Foundation. In fact, 100% of proceeds (runners pay to participate, just like regular races) go to the organization.

So yesterday morning, the girls and I, dressed as pseudo-Princess Leias, ran a section of the relay in Carlsbad. It was so so SO much fun and the girls had a lot of fun too. Once we arrived at the registration area, we were assigned our locations and received some pretty sweet swag. We received this great zippered reusable cloth bag and inside was a ton of stuff including a t-shirt, toys and other goodies. We also received a full-size light saber. My son had camp and couldn't make it, but he was super excited when he got his very own light saber.

Once the first set of runners got underway, we boarded the bus so we could be dropped off at our locations. We were to run along 101 along the coast, which is pretty much where I run every weekend. I knew the folks that didn't normally run here were going to be very pleased with the scenery. And as we drove along, we were ahead of the runners already underway. So, we were ahead of the Sail Barge and Course of the Force buses and all the police escorts. It was pretty funny watching all the people on the beach stop and double take at all the commotion coming down the street.

When it was my turn to be dropped off, it was a little stressful. They had to bring my stroller out and then we had to get in it quickly so we were ready when the runner handing off the light saber to me came by. The girls were loose in the bus, so getting them out and into the stroller was a little tough since they wanted to continue running around. But thankfully I was able to get them in quickly and in time to get the light saber from the runner before me and take off. I have to say, running with all that hoopla was so fun! The folks on the Sail Barge were recording us for the video and everyone on the barge was enamored with the girls and how cute they were as mini Leias. I have to say, they were pretty cute.

The run itself was only a quarter of a mile. I wish it was longer because I don't know when in life I'm going to have that much fanfare along with me on a run again! The police were escorting us and I had policemen on bikes on both sides of me. Then there was the photographer on his bike beside me. He was pretty crazy and one of the other runners said that at one point he fell off his bike. I hope he's all right! After my leg was done, there was another bus behind me to pick up all the runners as they were done. Getting on the bus was also a little stressful, but the event organizers that were on the bus helped me with the girls. They were great. Then we settled in to pick up all the runners in our group as they finished and then we headed back to Oceanside Pier to get our cars.

Overall, I had such a blast. I can't wait to do it again next year. And hopefully my girls will be a little more manageable and I can do it without the stroller. That would be nice. And we'll have to make sure our oldest can make it.

The company that started the event, Nerdist, has created recap videos of each day of the relay. Here's the video of our leg of the relay. You will definitely recognize 3 cute Princess Leias around 3:00 in the video :)


We were also featured in the San Diego Union Tribune. The reporter of the article was in the group of runners I was with. I'm flattered she mentioned us in her article. If you watched the above video, she was the lady dressed as the Angry Bird Princess Leia that appeared in the video right before us.

This was by far one of the most fun things I've done since moving here. Can't wait to do it next year! 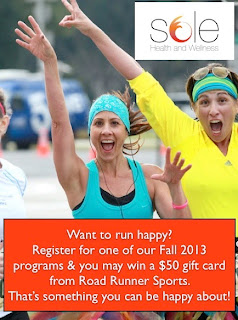 Perhaps you've been thinking about starting a running program. Perhaps you're already an experienced runner but you're in a running rut. Our running programs are a perfect way to reach your running goals, and there's one for every runner and every distance. You'll get in shape, meet new people, challenge yourself and have FUN!

And now there’s one more reason to join one of our Fall 2013 training programs: if you register between today and August 15th, you’ll be automatically entered to win a $50 gift card to Road Runner Sports. We want you to be ready to start your training with the right shoes and gear just for you!

Whether you’re ready to tackle your first 5K or want to up the ante with a half marathon, we’ve got the right program for you that will get you primed and ready to reach your goals.


Check out the list of our programs set to begin next month. Don’t wait! Register now and throw your hat in the ring for some new gear from RRS!

For a list of our programs, head to our Group Running Programs page.
Posted by Run with Sole at 9:19 AM 1 comment: