Yesterday marked the 35th running of the America's Finest City Half Marathon and 5K. It also marked the goal race for Sole Health and Wellness's second Run + Yoga Club with Ignite Yoga Fusion.

What started as a small running group/training program back in May, ended as a small family yesterday. Over the course of 12 weeks, we got to know one another, listened to some insane stories, discussed both silly and serious issues, suffered some, cried a little but laughed a lot. I am so happy I have the privilege and opportunity to meet such wonderful people for a living, helping them set and reach goals they never thought they could. Everyone found a new confidence, new friends and the belief that they really can do anything they set their minds to. And while it's always a little sad to see a training program come to an end, this isn't the end of the line for this group. I know friendships were made, running partnerships were forged and new goals will be set and reached. There are miles to go for this group!


Now, onto the race report. It was so incredibly hot. The heat, humidity and unrelenting sun will always be the first things that come to mind when I think of yesterday's race. We San Diegans are not used to hot, and certainly not humid, weather. Even though it's only been a year since I transplanted from the East Coast, I got used to the cool, dry weather this area has to offer very quickly. Even when I did live back east, I didn't do well in humidity. If I would classify anything in the world as my kryptonite, it would be humidity. I do not function well in it, and I definitely do not race well in it. 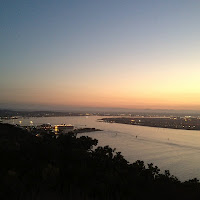 The morning started off with a beautiful sunset overlooking San Diego Bay from the Cabrillo National Monument (the start of the half marathon). Unfortunately, I wasn't able to see our 5K runners at all since their race began and ended in Balboa Park. Even though the half marathon also finished in Balboa Park, our 5Kers were long gone by then :) And my coaching counterpart (aka my husband John) ran with the 5K group, he neglected to get any photos. Oh well. 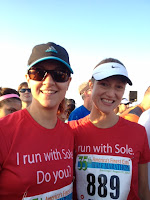 I was only able to see a few of our half marathon runners before the start and during the race. It was really chaotic and I wasn't able to see everyone. I am really disappointed about that because I love to see everyone start and finish their races. But it wasn't meant to be this time. But those I did see were doing really well and running strong, despite the heat, humidity and blazing sun. 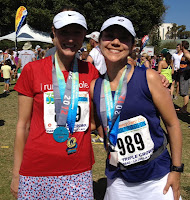 Overall, I think the AFC is a good race. It is the 3rd "jewel" in the Triple Crown series, with the Carlsbad Half Marathon in January and the La Jolla Half Marathon in April serving as the first and second jewels, respectively, in the series. A few of our runners were completing the Triple Crown at AFC this year, including myself. In addition to running some of the race with my group, I also ran with my good friend Mary, who also completed this year's Triple Crown. 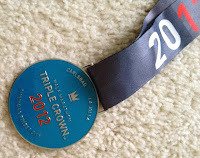 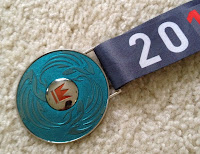 Those Triple Crown runners received a special fourth medal (in addition to the 3 medals earned from Carlsbad, La Jolla and AFC). In my opinion, the Triple Crown medal is downright gorgeous. I love it and I'm pretty proud to be wearing it!


They've been putting the AFC race on for 35 years now, so they should have things down to a science. But, as with any large race, there are some things that I think could use improvement. For instance, the first 3 miles of the race have plenty of water stations. But in the span between miles 3 and 6+ and 10+, there was not any water. While I always bring sports drink with me for this very reason (and advise my runners to do the same), not everyone does this. I felt really badly for people that didn't have any fluids with them. It was too hot for there not to be more water stations along the course. Granted, there were some stretches of the course where having a water station would have been impossible, it wasn't entirely out of the question. There were people going down left and right, literally, and having the extra water stations could have helped those poor runners.

The finish line area was fun but a little chaotic, in my opinion. Thankfully the area within Balboa Park that was used for the finish line and post-race party was large enough to accommodate the 9000+ half marathon and 5K finishers. With the majority of runners and spectators parking in parking areas within Balboa Park, though, leaving the race was a bit of a nightmare.

The race course is definitely one of the pluses of the AFC. It starts in Point Loma, runs along Harbor Drive and the San Diego Bay, runs up through the Gas Lamp District of downtown and finishes in Balboa Park. There are plenty of areas with something interesting to look at, hopefully distracting you from the weather! I would classify the course as rolling hills. The course map would lead you to believe it has a large downhill section as the majority of the race, but it isn't really that downhill. And the last hill of the course, between miles 11 and 12, is definitely manageable. Really, the only thing bad about that hill is that it happens so late in the race. But the last mile is only a slight climb before you turn into Balboa Park and run downhill to the finish.

Even with it's shortcomings, and the hideous weather, I still plan on coaching programs targeting this race in the future. It's a great hometown race that fills you with pride as you run through what really is America's Finest City.

Speaking of future programs, we have some exciting new programs for the fall. We have Women's 5K and 10K programs, as well as another Run + Yoga training program. Check out our website for all the details and to register.