Yesterday I did my first race here in California. While this wasn't my first race since having my twin girls, it was my first race as a local Californian. I was pretty excited for a number of reasons, and running with a good friend was top of the list.

This was my first time running this race and I have to say that it was a good one to do. It was very well organized, the water stations were well stocked and the crowd support was decent. The course started and finished at the mall in Carlsbad. It went from the mall, through Carlsbad Village and then onto Highway 101, which is along the coast. You can't beat the scenery. Running along the beach has got to be the best way to run a race. The breeze cools you off and the views definitely pass the time nicely. There were rolling hills, more than you would expect, but nothing that isn't too ridiculous. My neighborhood is far hillier.

The size of the field was manageable. After running Las Vegas, anything would be manageable. I think I heard there were about 10,000 people running both the full and half marathon, with the majority running the half. So, with the race size being relatively small, we were able to get good parking, use the restrooms in a timely manner and get into the start line with relatively little trouble. The one time it felt claustrophobic was making our way into Carlsbad Village (mile 1 of the race). The roads were a little narrow and it was tight since it was the beginning of the race and the field hadn't thinned out much yet. But this is common in the beginning of a race. 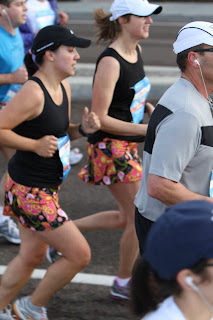 My race started off great. We set a good pace and we were feeling good. It was great running with my friend Mary. We met in September and our sons are in the same class at school. We have a lot in common and our husbands do as well. We've become really close and I'm so grateful to have found such a wonderful friend. I was really looking forward to running the race with her since we'd done the majority of our training together.

But after about 6 miles, my stomach decided it was time to throw a wrench in my race plan. This has happened before as I've been struggling with stomach issues since I had my first child in 2005. Pregnancy changed the way my body responded to sugar and I've been having problems ever since. I told Mary to go on ahead. There was no sense in screwing up her race. I had to make a pit stop and I didn't want her to waste time waiting for me.

I was so disappointed that, yet again, my stomach screwed things up. In the year after I had my son I was able to get things under control. I was able to get back into shape quickly and get the stomach issues resolved (for the most part) so that I could enjoy racing and even set PRs. However, my pregnancy with my twins really did a number on my body and I've been having a hard time getting back to where I'd like to be.

Under normal circumstances, I would beat myself up for my performance yesterday. Tell myself I'm a loser and I'm not fit to run, let alone coach anyone. If you haven't noticed, I'm super hard on myself. But yesterday during the race, I had to talk to myself as if I were a client. Here's how the conversation went:

"Jenn, think about where you were a year ago at this time. You were pregnant with twins, you had been on bed rest for 3 months at that point, with 3 months left to go, you had been through one surgery with another one looming and you had gestational diabetes. And let's not forget that once you actually got through the pregnancy and birth of those beautiful girls, you had to pack up your house, sell it, buy a new one and then move your family of 5 across the country. And once you got there you had to get everyone settled, get your son into a new school and deal with all that comes with that, deal with the ups and downs of caring for infants X two (read: be up all night and on the go all day), plus your husband started a new job AND you started a new business. You're still learning how to fit in endurance running in your life. And you're still coming back physically from having twins. That is very different from having one baby and it changes your body completely. You're basically starting over.  GIVE YOURSELF A BREAK."

So after my coach said all this to me, I felt a little better. I'm not a loser. I'm totally fit to run and my years of running and experience make me a great coach. In fact, these current struggles will make me an even better coach. Ok, yesterday's performance wasn't terrible. It was an accomplishment! 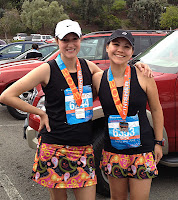 We are our own worst critics. Why is that? Why are we so hard on ourselves? Yes, setting goals is important for a number of reasons, but when we don't reach them, we shouldn't beat ourselves up to the point of wanting to throw in the towel. The greatest achievements in life are hardly ever reached on the first attempt. We have to work hard and keep trying. That's what I plan to do.
Posted by Run with Sole at 6:23 AM 1 comment: 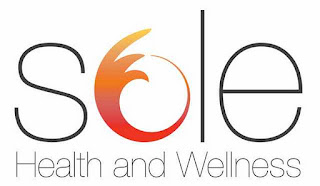 We at Sole Health and Wellness are pleased to announce our first program for Spring 2012: the Beginner 5K Running Program in San Elijo Hills!

“I’m not a runner,”“I can’t run,” and “Running is just not for me” are common phrases we hear. But we feel ANYONE can run as long as they go about it the right way. In our program you’ll learn all the ins and outs to help you be successful!

The program is specifically for new and inexperienced runners. The program starts Feb 14th and will meet at the fountain in the San Elijo Hills town center every Tuesday at 10AM. Strollers are welcome and it's truly a beginner's program. No running experience is required. It's a fun, laid-back intro to running and we'll gradually build up to run a 5K at the end of the program. We're training for the San Marcos Fitness Roundup 5K on April 21st. The program is 10 weeks long, includes weekly coached runs, information sessions, weekly newsletters, a detailed training plan and more. The cost is $85, which is $8.50 a session!