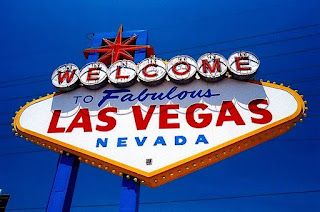 Last night I ran my first race since I got pregnant with my twin girls last year: the Las Vegas Half Marathon. It was a great time for many reasons!

I met friends Steve, Tish and Kanayo from back east in Las Vegas and all of us were to run the half marathon. Unfortunately, Tish is injured and wasn't able to run the race. But it was so good to see her, I'm glad she came anyway! We all arrived Friday night. Saturday was the expo, which we thoroughly enjoyed. It's one of the largest expos in the country and it does not disappoint. Much to do and see and, of course, buy. And we certainly did all three!

Sunday we really didn't do anything but rest. The race didn't start until 5:30 so we spent the day relaxing, painfully planning our meals and trying to stay off our feet. Once we were ready to go, we headed over to Mandalay Bay where the race started. On our way there, we stopped to use the restroom. I had a water bottle and my throw-away gloves with me as I went into the bathroom stall. I didn't want to put anything on the floor of the bathroom, so I was trying to hold everything and use the bathroom. Well, not to be too disgusting but as I was trying to get my running skirt down to use the bathroom, my gloves fell into the toilet! Oh well. I had to throw them away before I had the chance to wear them! Thankfully it was warm enough that I didn't need the gloves.

On the way out of the hotel, we met up with 44,000 of our friends also running the race. It was insane and I did not like it at all. I've run races of this magnitude before and they were organized in a way that you didn't even realize there were that many people there. Here, you knew it and it wasn't fun. It took us at least 30 minutes just to walk through the hotel exit and get to the race staging area. We finally got out of the hotel and made it through the port-o-potties. Kanayo put his stuff down to get things together to give to Tish while he was running. When he picked everything up and walked over to the port-o-potties, he realized lost his gloves!! There was definitely a curse on our gloves. After we searched, we gave up and went to the race start line. It was a mob scene. We couldn't get into the start line, there were so many people. Once the race started and people were crossing the start line, we were actually able to get into the start line. It was not a great way to start a race.

Once we got going, it didn't get any better. The mobs of people were really hard to maneuver through. We couldn't get into a good groove until at least mile 3 and it wasn't until mile 5 that I felt like I was actually even close to the pace I wanted to run. Around mile 8, I was itching to push the pace. I was running with Steve and he was fine with me going ahead. We discussed this before the race and I knew he wouldn't be mad with me going on without him.

With all that said, it was very cool running the Strip at night. The lights and energy made the miles just fly by. We ran the entire length of the Strip one way, then ran through the Freemont Street Experience (which isn't as nice as I remembered it to be) and some sections that were pretty hideous. I'm glad we ran that at night because I'm sure that area is awful to look at during the day.

There was plenty to look at within the crowd as well. Lots of people dressed as Elvis and superheroes, lots of glitter and shiny things. I had thought I'd seen everything as a runner up until the point I saw someone's bare butt running the race. Yes, a bare butt. I was pleasantly running along, thinking about life when out of the corner of my eye, I see a butt. I thought to myself, "That could not have been an ass...right?" As I got closer, it was, indeed, an ass. Some guy was running in just a jock strap, his butt hanging out and bobbing along as he ran. He had some other contraption on but his butt was clearly hanging out. He was drinking a beer as well. I passed him but did not want to see what he looked like from the front, so I just kept going. Up until that point, I thought I had seen everything while on the run. Clearly I was wrong and there is plenty more for me to see.

Anyway...because this was my first race since June of 2010, I really had no expectations. It was one thing that it was my first race, but since June 2010, I got pregnant with twins, was on bed rest for almost 6 months, then gave birth to said twins, sold my house, bought a house in San Diego and then packed up my family of 5 (and a dog!) and moved across the country. Basically, a lot has happened since my last race. Once I was able to get back to running, I have had a hard time finding the time and energy to train the way I'd like, as you can imagine. I do the best I can. So with all these factors, I just came to Vegas with the goal to finish and finish happy (which should always be your main goal!). 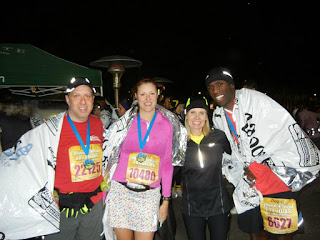 When I left Steve, I saw that there was a slight chance I could PR. So I went for it. But as the miles went on it just wasn't possible. I lost way too much time in the beginning of the race and couldn't make it up. With the first 5 miles being slower than I would have liked and all the people just everywhere, it was just impossible to make up the time. Oh well. I'm happy with my result. As Tish said, this is the race that says "You're back." That's right: I'm back!

As I was running the last miles by myself, I was just thinking about how far I have come in the last 2 years. Just as my 50K was a way to get through the most difficult time in my life, this race was my way to re-enter my life. I feel happier today than I have in many years. I feel like myself again. Even though this past year has been extremely hard and overwhelming at times, I feel like it's been the best year of my life. Everything I could have wanted and more has come my way. Two beautiful little baby girls, a son who is in love with his new life, a husband who loves his family AND work and is happy again, a beautiful house we're making into our home, meeting and getting to know some wonderful new friends, all in the most beautiful place in the world.

I could have run a race before this one, as my first race post-babies. I could have done something low-key and just quietly returned to racing. But when have I ever done anything quietly? This was a big deal. It took an incredible amount of work and juggling of time and responsibilities to train. I'm proud of how the race turned out and I am back. I have a bunch of races on my calendar for 2012. Some may go well and some may not, but I do know that I'll always finish with a smile!

If you're interested in reading about our escapades in Las Vegas and seeing some photos, I've posted everything over at my personal blog.

Happy running!
Posted by Run with Sole at 9:25 PM