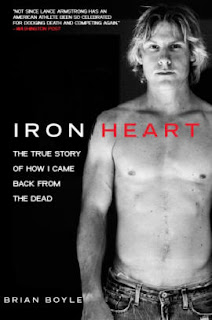 Last week I had the distinct pleasure to read Iron Heart: The True Story of How I Came Back From The Dead by Brian Boyle. I read it for a couple of reasons. I first heard about Brian back in 2007 when he completed the Ironman World Championships in Kona. His story captivated me and when I heard he put out a book, I got in touch with him. He's doing an appearance and Fun Run with us at Fleet Feet Sports, Gaithersburg this Thursday, January 7th. I had to read the book before I met him :)

Back to Brian's story. Back in 2004, a month after he graduated high school, Brian was in a horrific car accident that should have killed him. Technically it did kill him, he was pronounced dead 8 times. His injuries were so severe he was placed in a medically-induced coma for 2 months because he wouldn't have survived the pain from his injuries. His pelvis was broken, along with several other bones. But what was worse was the trauma his internal organs endured. Most of his organs were dislodged and moved, including his heart which was knocked across his chest. It's truly a miracle that he survived the crash.

After he came out of the coma, doctors thought he would be resigned to a life in assisted-living homes and certainly would never walk again. But Brian was an athlete at the time of the accident. He was a swimmer and bodybuilder, getting ready to swim at the collegiate level. He was in phenomenal shape and his mental and physical toughness really helped him in his rehabilitation. Not only was he able to regain his physical strength and abilities, he was able to live the active lifestyle he loved.

Three years after the accident, after his rehab was complete for the most part, Brian contacted the Ironman organization. A dream of his was to complete an Ironman, so when visiting the website one day he sent an email detailing his accident, recovery, rehabilitation and dream. The organization was so impressed with Brian's sure will to survive that they contacted him. They wanted to give Brian a media slot to compete at the Ironman World Championships in Kona. The catch was he had never done a triathlon before. So, he had to complete a Half Ironman first, then they would see if the full Ironman was doable. He was given about 2 weeks time to train for the Half Ironman. Two weeks. But he did it. It hurt, but this previously paralyzed guy finished a 70.3-mile race just over 3 years after his accident. The Ironman organization gave him a slot at Kona, which was 45 days after his Half Ironman. 45 days.

Well, Brian worked hard and was able to finish the 2007 Ford Ironman World Championships. In just over three years he went from a healthy, active 18 year old, to an accident victim with little hope of walking again, to an Ironman.

I think his story is extremely inspiring. And not because he fought hard and overcame odds that were against him. That's only part of his amazing story. Brian faced all of this with strength, courage and a tenacity that people in his situation rarely have. Yes, he did have dark moments and times when he wanted to give up. But for the most part, he gave it his all everyday with a smile on his face. He now lives his life to the fullest and in a way that appreciates every moment. He isn't boastful or conceited, though he is proud of his accomplishments. He is humble and modest and thankful that he has been given this second chance. He holds blood drives to raise awareness and support for the blood services industry that helped save his life. He supports the rescue teams that work tirelessly to help those in accidents like his. He still visits his doctors and nurses that cared for him and worked to save his life.

I'm inviting all Washington, DC-area runners to our Fun Run/Walk on Thursday at 6:30 PM. Brian will be there at 6:00 for a book signing and then we'll run at 6:30. This is a rain or shine event, so please plan on coming. Even if you don't run, you don't want to miss the opportunity to meet such an amazing person. If you're in need of some inspiration this New Year, Brian is it.

Happy running!
Posted by Run with Sole at 3:59 AM 1 comment: